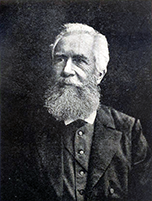 In 1860, there was a man named Ernst Haeckel who believed in evolution. He was a German professor at the University of Jena. During his years of teaching, he tried to convince his students that evolution is true. To “prove” this to his students and fellow teachers, he made up the idea that a human baby goes through different evolutionary stages as it grows. According to Ernst Haeckel, a human embryo (a baby in its early stages) starts out in a one-celled stage, just as its ancient amoeba-like ancestor. It develops gill slits, just like its ancient fish ancestor. And it even has a tail, just as its ancient ape-like ancestor. Therefore, suggested Dr. Haeckel, if we will just watch a human embryo grow, then we will see the different stages of evolution.

In order to prove his theory, he made several drawings of the different stages. But when he published these drawings, other professors began to question Haeckel’s accuracy. Upon further investigation, it seemed that Dr. Haeckel had not only been inaccurate, but he had even been dishonest. Not only had he faked some of his drawings, but he also used the same picture three different times, and labeled one a human, the second a dog, and the third a rabbit. Haeckel was proven to be wrong and his idea about humans going through their evolutionary family tree as embryos was shown to be completely false. 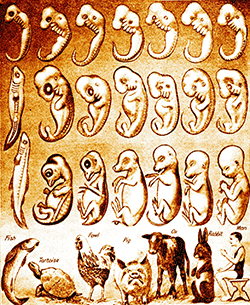 That should be the end of the story, but it is not. Even though Haeckel’s false theory and drawings were disproved about 150 years ago, they are still being used today in many science textbooks to “prove” evolution. Why are textbook writers still using drawings that were faked, altered, and falsified? That is the real mystery. On May 29, 2010, I was speaking to a group of teenagers in Michigan about Ernst Haeckel and his false evidence. I explained to them that many textbooks still use the false idea that human embryos are similar to animal embryos to “prove” evolution, even though this idea was disproven over 100 years ago. A few days after my visit, a ninth-grader sent me an e-mail that said:

“This week in my Biology class we learned about the theory of evolution. During this segment we had to do worksheets on evolution. Two of the main things we did were on the pepper[ed] moths and similarity in embryos. Those were two things you proved false during your sermon. You taught us that these things were proven false, but still put in textbooks and taught in schools today. I was both astonished and humored that these two false teachings showed up in my high school the week following your sermon.”

You see, even though Haeckel’s ideas were proven false, they are still used to teach evolution. Why do you think that is? One reason is because if textbooks took out all the “evidence” for evolution that we know is false, then they would not have anything left that they could use to “prove” evolution.

Let me give you another example. In August of 2009, a man named Jack sent an e-mail to Apologetics Press. He is a person who believes in evolution and who thinks our writing about God and creation is not right. When he read our information on the Discovery Web site, he said: “Your website is absolutely horrible.” And he said that in many instances, our answers were “dead wrong.” I asked him to provide us with information that proved evolution and showed our information to be wrong. He wrote back and said: “Also, evolution predicts that in the womb we produce gill sacs and a coat of fur which we shed before we are born. How does ‘creation’ explain this phenomena?” He used the false idea that humans have gill sacs to “prove” that our information was wrong. He did not know that humans never have gills, and that the idea was proven false more than 100 years ago. But, as you can see, it is still being used as evidence that evolution is true.

In 2006, a very well-known biology teacher named Francisco Ayala wrote a book titled Darwin and Intelligent Design. In that book, he tried to prove that evolution is true. In fact, he actually teaches evolutionary biology. He wrote: “The embryos of humans and other nonaquatic [not living in water] vertebrates [animals with backbones] exhibit gill slits even though they never breathe through gills. These slits are found in embryos of all vertebrates because they share a common ancestor: the fish in which these structures first evolved.” Dr. Ayala should know better. Humans never have gill slits. Haeckel was wrong, and we have known that for many years. But, as you can see, even the “top” evolutionists still use these false, disproven ideas in their attempts to “prove” evolution.

The next time you see drawings of “similar” embryos, remember that Ernst Haeckel lied to us about evolution.