Following the Toucan’s Nose to a Designer 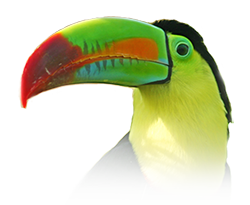 The writers and editors of National Geographic are notoriously guilty of saturating their articles with evolution. That is why it is almost humorous to read articles in the periodical that seem to slip by the editors—articles that, if read in a straightforward manner, defy evolution. For instance, in the December, 2006 issue, the editors included a tiny, one-page article titled “Power Beak.” This article discusses the beak of the toucan. John Eliot, the author of the article, interviewed Marc André Meyers, “a materials scientist at the University of California, San Diego.” Meyers believes the unique design of the toucan beak could be used to produce strong, lightweight materials used in vehicles.

Meyers describes the toucan beak as a beautiful structure. He then goes into some engineering detail:

The surface is made of keratin, the same material in fingernails and hair. But the outer layer isn’t a solid structure. It’s actually many layers of tiny hexagonal plates, overlapping like shingles on a roof. The interior is different from the shell, made of bone. It consists of a light yet rigid foam made of little beams and membranes. And some areas of the beak are hollow (Eliot, 2006, p. 30).

On the same page, to the right of Meyers’ comments, the reader can see two pictures from a microscope—one of the hard foam inside the beak and the other of the “shingle” layers of keratin. To the left of the comments there is a toucan head and beak, in which the layers are shown in a cross-section-like diagram. The combined pictures look like they are straight out of an engineer’s portfolio.

What is Eliot’s assessment of the toucan’s beak? In a simple, yet oh-so-telling, sentence, Eliot said: “[T]he toucan’s beak is ingeniously designed to be both strong and light weight.” Look closely at the wording. He says the beak is “ingeniously designed.” The American Heritage Dictionary defines the word “ingenious” as: “Marked by inventive skill and imagination. 2. Having or arising from an inventive or cunning mind; clever” (2000, p. 900, emp. added). Notice that the word “ingenious” implies an inventive or cunning mind. What inventive or cunning mind engineered the beautiful design of the toucan beak? It could not have been the evolutionary process, since evolutionists themselves admit that the process has no ultimate goals and no creative mind powering the system. The only logical answer is the supernatural mind of God. If the editors of National Geographic would only follow the nose of the toucan, they would find the ingenious Designer—and they would stop writing false, evolutionary propaganda.