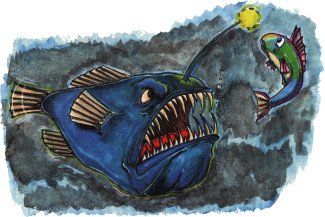 Angler fish dangle a “fishing pole” and “lure” to catch their food. The “lure” is filled with light-emitting bacteria which attracts other fish. When they swim close to see the light, the angler fish gulps them down!

Have you ever been sitting at home when the electricity went off? It can be pretty scary! What was the first thing you did? If you’re like most people, you probably went searching for a flashlight.

Have you ever heard of a fish with a flashlight? As odd as it may sound, such fish do exist. Sunlight can only penetrate the ocean to a depth of around 375 feet. Once you go below that level, the water is pitch-black. However, scientists have discovered many different fish living in this dark, cold water that have the ability to make their own light. How do they do it?

These fish have special pouches near their eyes, tails, or fins. In each of these pouches is a colony of thousands of bacteria. These bacteria produce certain chemicals that give off a faint glow; the darker the surroundings, the brighter the glow appears to be. Some of these fish have special “shutters” over the pouches in which these bacteria live. Sometimes the fish do not want to be seen, so they simply close these shutters. This keeps the glow from being seen. At other times, the fish open these special shutters, and allow the chemical glow to light the dark surroundings.

So, bacteria that give off light live inside fish deep within the dark, cold water of the oceans. One organism (bacteria) helps another (the fish). This seems pretty odd, doesn’t it? Who could have designed such a system? Scientists who do not believe in God want you to believe that it “just happened.” But that is not a good answer. Only God could have designed such a wonderful system.