In the May 6, 2002 edition of Newsweek, Fred Guterl wrote a brief article titled “Evolution: Birds Do It” (139[18]:11). The gist of the article centered on a couple named Peter and Rosemary Grant, “a married team of biologists from Princeton, [who] have worked for three decades to fill in Darwin’s blanks.”

The major problem with Mr. Guterl’s article hinges on the fact that he is not aware of the true “blanks” that need to be filled in with regard to Darwin’s theory. In the opening paragraph of the article he wrote: “Charles Darwin described how the daily struggle for food and sex ultimately determines the future of a species, be it dinosaur, bird or human. He had plenty of fossil evidence to back him up, but he never actually observed natural selection taking place.”

In sharp contrast to this statement, the tenth chapter of The Origin of Species is titled “On the Imperfection of the Geological Record.” In it, Darwin argued that, due to the process of natural selection, “the number of intermediate varieties, which have formerly existed, [must] be truly enormous.” However, he went on to admit: “Geology assuredly does not reveal any such finely graduated organic chain; and this, perhaps, is the most obvious and serious objection which can be argued against this theory. The explanation lies, I believe, in the extreme imperfection of the geological record” (1956, pp. 292-293).

Darwin most certainly did not have “plenty of fossil evidence to back him up.” He hoped that future geological research would fill in those blanks, due to the fact that fossil evidence was the major lacking evidence needed to verify his theory. Unfortunately for Darwin and his theory, that evidence has been much less forthcoming than he had hoped. In fact, if Mr. Guterl had checked his own publication’s archives before he printed his misleading article, he would have discovered that in the November 3, 1980 issue of Newsweek, Jerry Adler went on record as stating: “Evidence from fossils now points overwhelmingly away from the classical Darwinism which most Americans learned in high school: that new species evolve out of existing ones by the gradual accumulation of small changes, each of which helps the organism survive and compete in the environment” (96[18]:95). Nothing in that regard has changed in the more than two decades since Mr. Adler made that statement.

Mr. Guterl made two common mistakes in his article. First, he attributed evidence to Darwin’s theory that it does not (and never will) have. Second, he discussed thirty years of experience by two intelligent scientists who documented minor changes among the various beak sizes and body weights of finches. He then used those minor changes to imply general (amoeba-to-man) evolution, but failed to recognize the fact that those minor changes have built-in limits. The finches never changed into anything other than finches. You could put scientists on the Galapagos Islands for the next million years (if the Earth were to stay around for that long) and they never would see a finch change into another type of animal. Evolution is a theory that lacks scientific evidence. Darwin looked to the fossils, and Guterl looked to the finches, but it is time that we all start looking past the falsehoods. 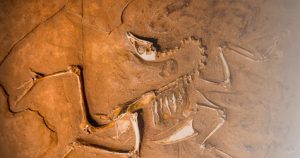 What You Can Never Know Based on a Fossil

What’s the Big Deal About Dinosaurs?