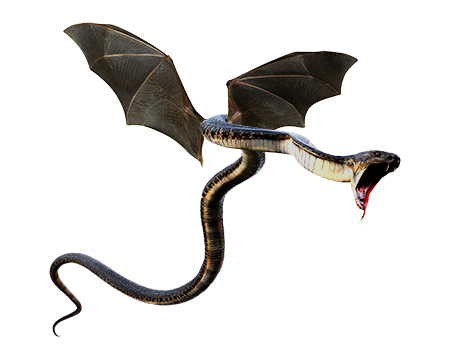 Flying reptiles are interesting to us today because they are extinct. To the people in the past, however, flying reptiles may have been more “everyday” animals, especially the smaller ones. Think about this: what animals do we see alive today that people in the future would find remarkable? I think giraffe fossils would be odd and interesting to those who have never seen one. What about an octopus or an ostrich?

The flying serpent was one of those interesting animals that lived in the past. What was this creature? We are not exactly sure. We read about it in Isaiah 30:6:

Through a land of trouble and anguish, from which came the lioness and lion, the viper and fiery flying serpent. They will carry their riches on the backs of young donkeys, and their treasures on the humps of camels.

As you read this verse, you see that animals such as the viper, lion, camel, and donkey are all listed. These animals don’t seem unusual to us, because we still have them around. In that same list we read about a “fiery flying serpent.”  We no longer see snakes with wings, so this creature seems unusual or even unreal. Since it is listed along with other real animals in the verse, there is no reason to think it is imaginary or impossible. In fact, other history sources talk about flying serpents. The ancient historian Herodotus wrote in about 450 B.C. He said:

There is a place in Arabia to which I went, on hearing of some winged serpents…. The form of the serpent is like that of a water-snake; but he has wings without feathers, and as like as possible to the wings of a bat.

Wouldn’t it have been neat to have been alive during the days of Isaiah or Herodotus and see those flying serpents? Maybe hundreds of years from now, people will be talking about how cool it would have been to have lived during the time of jelly fish or the giant octopus.