Did you know that God made a creature that has a comb for a tongue, can taste the air with a special organ in its mouth, can see in the dark, and can measure things with its whiskers? He did. And in this issue of Discovery, we are going to learn all about God’s fantastic felines. The word “feline” is the name given to the cat family. There are approximately 40 different species of cats in the world. The tiger is the largest species. It can grow to be 13 feet long and weigh almost 700 pounds. It is difficult to determine which species of cat is the smallest. The littlest cat on record was a Himalayan-Persian cat named Tinker Toy. He was 2.75 inches tall and 7 inches long.

All cats are carnivores. That means they eat meat. God designed them with special features that make them one of the most remarkable predators in the world.

Cats have muscular bodies that are agile and great for running, climbing, and jumping. In fact, the cougar (also called the mountain lion) is one of the greatest jumpers in the animal kingdom. From a sitting position, it can jump straight up to a height of 18 feet. That is eight feet higher than a basketball goal. If it could grip a basketball, it could dunk every time! If a cougar is running and jumps, it can cover up to 45 feet in a single jump. That means if you were to walk across a large room using 15 long steps, you would cover the distance of one cougar jump.

God designed the cat tongue to be extremely useful as well. Maybe you have a pet cat. There are about 60 different breeds of domesticated cats. The word “domesticated” means tamed or made into pets. If you are a cat person, though, you know it is really hard to “tame” any cat to get it to do just what you want it to do. If you do have a cat, you know that sometimes it will cough up a hairball. Other pets such as dogs do not get hairballs. Why do cats?

If you have ever been licked by a cat, you probably noticed that its tongue was very rough, almost like sandpaper. The rough texture of a cat’s tongue comes from tiny structures on its surface called papillae (puh-PI-lee). They are little hooks made of keratin, which is the same substance your fingernails and toenails are made of. Basically, cats have a hairbrush for a tongue. They groom themselves (and each other) with their tongues so much because it keeps them clean, removes dirt and parasites such as flees and ticks, combs their hair to keep it slick and straight, and spreads oil evenly to help water roll off their fur more quickly. Who knew that cat licking was so helpful? The terrific cat tongue is not the only astonishing feature found in the mouth of a cat.

Sure, cats have 30 teeth that can be used to hunt and eat prey. But they also have something called a vomeronasal [vah-muh-row-NAY-zel] organ (also known as a Jacobson’s organ). It is located on the roof of the mouth, just behind the front teeth. This organ gives cats a kind of 6th sense that is not smell, or taste, but a mixture of both. In essence, it can breath in air and “taste” it to learn more about what animals or chemicals are in the area.

Imagine walking about with a ruler stuck across your face. You never know when you might need to measure a tight spot to see if your head will fit safely into it. Well, cats have built in rulers—their whiskers. Cat whiskers are super-sensitive hairs that grow on their front legs and face. These hairs are connected to follicles in their bodies that connect to nerves. The nerves detect tiny vibrations and other important features of the cat’s surroundings. Cats use these whiskers to “see” in the dark by feeling their way through tight spots and dark places.

As if whiskers were not cool enough, cats also have exceptional eyesight. God equipped them with several special sight features. First, they can have up to 20/200 vision. That means what humans would see at 20 feet, cats see clearly at 200 feet. Also, they have many more rod cells in their eyes than humans have. While humans have about 125 million rod cells, cats have up to eight times that many. Rod cells are sensitive to lower light and help cats see better in the dark. Furthermore, cats have a tissue called tapetum that sits just behind the retina. This tissue reflects light back into the eye to help cats get the most out of the light. The Tapetum also gives cats’ eyes (and those of other animals) a reflective glare when they stare into a flashlight or car headlights. God designed cats with everything they need to be successful. Not only are they successful predators, pets, and mice catchers; their remarkable design also successfully shows God’s power and intelligence. 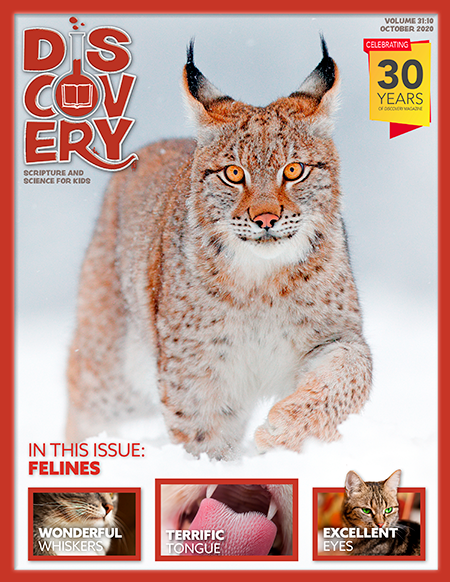 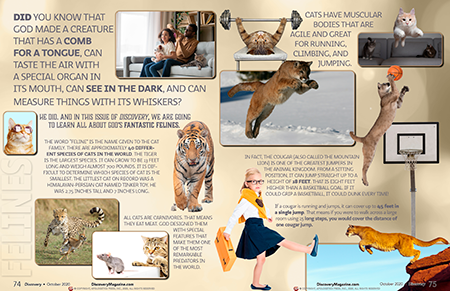 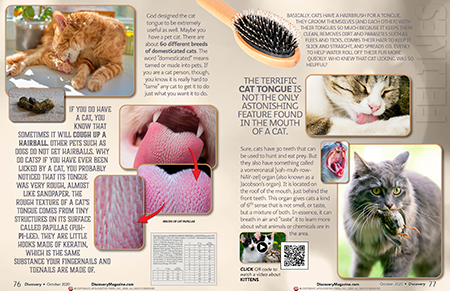 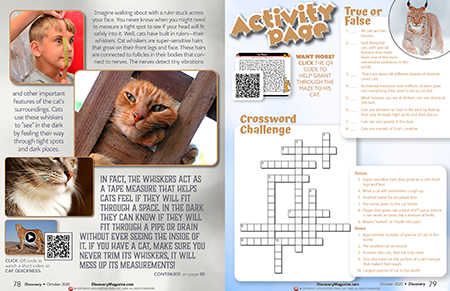 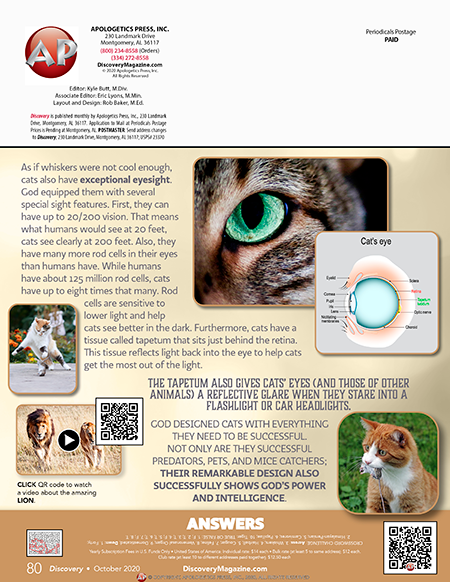 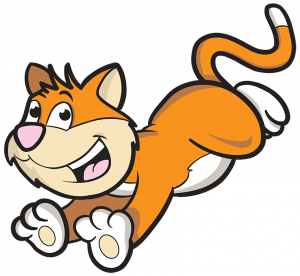 What Does a Cat’s Tail Do?