“Falling Away from Grace”?

One of the doctrines of Calvinism that has created a considerable stir through the years has been the notion of the “perseverance of the saints”—commonly referred to as “the impossibility of apostasy” or “once saved, always saved.” In his epistle to the churches of the Galatian province, Paul wrote a remark that calls that doctrine into question. The King James Version reads: “Christ is become of no effect unto you, whosoever of you are justified by the law; ye are fallen from grace.” Most versions have a similar reading. The NKJV and NASB also have “fallen from grace.” Quite a few translations add the word “away” in their rendering—“fallen away from grace”—including  the ASV, ESV, RSV, NRSV, NIV, CEB, CJB, ISV, MOUNCE, NET, TLV, WEB, WYC, and YLT. The word “away” may leave the impression that persons were heading toward the state of salvation but, prior to achieving that state and entering into it, they veered away from it (see Figure 1). 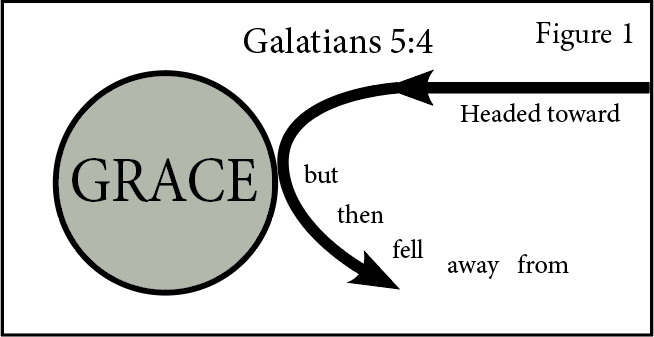 The Greek term translated “fallen” is from the verb pipto meaning “to fall.” In Galatians 5:4, the word has the preposition ek prefixed to it. This Greek preposition means primarily “out of.” Ekpipto, then, means literally “to fall out of.”1 One would need to be “in” a realm or sphere in order to “fall out of” it (see Figure 2). In the case of the Galatians, they had been converted to become Christians (Acts 18:23) and were counted as being in Christ’s church (Galatians 1:2-3). 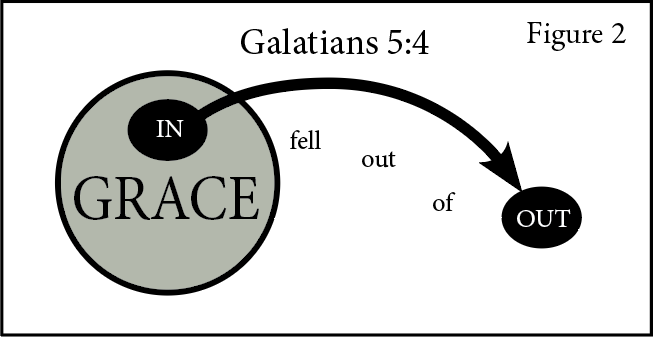 Baptist Greek grammarian A.T. Robertson explains the language: “Ye did fall out of grace,” “ye left the sphere of grace in Christ and took your stand in the sphere of law as your hope of salvation.”2 Mounce adds: “to fall from, forfeit, lose.”3 Meyer noted: “Ye have forfeited the relation of being objects of divine grace.”4 And Eadie explains: “Christ’s method of justification is wholly of grace, and those who rely on law and merit are in opposition to grace—are fallen out of it.”5

These observations are buttressed by the fact that in the same verse, Paul says to the Christians: “You have become estranged from Christ.”6 The word means to “dissever from.”7 In addition to “estranged,” other translations have “severed” (ASV/ESV/RSV), “alienated” (NIV), and “cut yourselves off from Christ” (NRSV). Therefore, it is possible at one time to be within the grace of Christ and thereby saved, and then to so conduct oneself as to be severed from, to fall out of, and forfeit that grace.

4 Heinrich Meyer (1884), Critical and Exegetical Handbook to the Epistles to the Galatians (New York: Funk & Wagnalls), p. 222, italics in orig.