The smallest monkey in the world, that weighs about as much as a small apple, is the pygmy marmoset.The pygmy marmoset lives in South America and spends much of its time in trees. Although it is typically only 5.4 inches long, don’t let its size fool you. This little guy can leap over 16 feet.

While it likes to eat certain insects, especially grasshoppers, it mainly eats tree sap. Its lower teeth have been perfectly designed to allow it to gnaw into trees and stimulate sap flow from the tree. Its digestive tract has also been specially designed by God. The pygmy marmoset has an enlarged cecum (SEE-come), which allows the tree sap to sit in the intestines longer while it is broken down and digested.

As you might expect, since this monkey is so small, it is hunted by many other animals, including predator birds, large cats, and climbing snakes. However, it is not without a defense system. God designed its neck so that it can turn its head 180 degrees (humans can turn their heads around 140 degrees), which helps it see predators that are sneaking up on it. Pygmy marmosets also team up and attack predators like a mob—loudly squeaking, whistling, trilling, and clicking at them until they retreat.

Adult pygmy marmosets have tails that are longer than their bodies and that have black rings like those on a raccoon. The fur on their faces sweeps back over their heads, and white marks can be seen on either side of their mouths and on their noses. Zoologists believe that these markings help the marmosets to see the facial movements of other marmosets, helping them to communicate with each other in the dark, dense forests of South America.

Some people want you to believe that the pygmy marmoset came about accidentally—as a result of random mutations. However, its specially designed teeth, digestive tract, neck, and facial markings show that this little guy was made with purpose and intent in mind—proving that there must be a God that can make such amazing, tiny creatures. 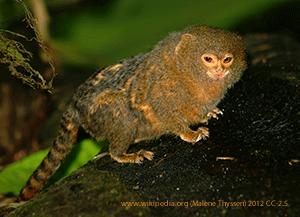