On a hot day, Abraham sat at the door of his tent. When he looked up, three men stood beside him. Being a thoughtful man, he immediately acted hospitably to the three strangers. He begged them to rest under the nearby trees and allow him to bring them food and water. Abraham had one of his servants prepare an expensive meal for the guests.

At this point, Abraham apparently did not know that the men were actually two angels as well as the Lord (Genesis 19:1; Hebrews 13:2). When the Bible describes angels on Earth, they did not have wings as many portray them. Instead, they had the appearance of male humans (Genesis 18:2). After telling Abraham that Sarah would soon have a child, Abraham certainly would have known who he was entertaining. 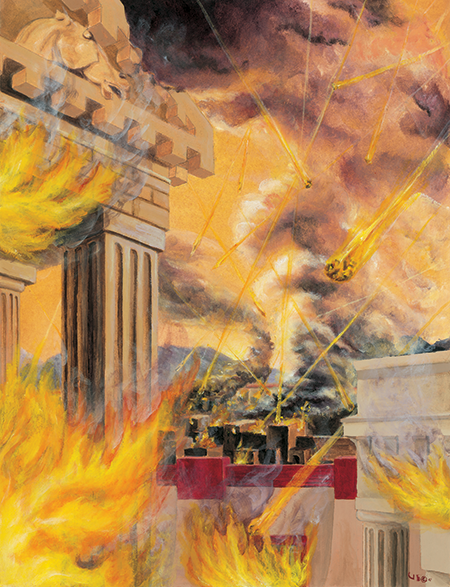 God told Abraham that they were going to the cities of Sodom and Gomorrah. The cities were filled with extremely wicked men (Genesis 13:13). Abraham knew that God would destroy the cities for their wickedness. The two angels left and went towards Sodom, but Abraham, surely thinking about his nephew Lot who lived in Sodom, asked the Lord if He would spare Sodom if there were 50 good people in it. God said He would. Abraham asked again and again—“What if there were 45?” “What if there were 40? 30? 20? 10?” God said He would spare Sodom for the sake of 10 righteous people. Abraham may have thought that if there were not 10, then the city did indeed deserve to be destroyed. Regardless, he stopped asking at 10. But surely there would be at least 10 good people—after all, Lot, his wife, two unmarried daughters (Genesis 19:8), and other daughters with their husbands (Genesis 19:14) lived in Sodom.

Sadly, the two angels did not find even 10 righteous people. So God destroyed Sodom, Gomorrah, and the other surrounding cities for their wickedness. The influence of those wicked cities even caused Lot to lose his wife, sons-in-law, and apparently some of his daughters. The two surviving daughters had clearly also been influenced in a bad way by living in such a wicked city (Genesis 19:30-36). If only Lot had thought through the spiritual danger of “pitching his tent” towards Sodom instead of, like Abraham, staying away from those wicked cities (Genesis 13:12). “Do not be deceived: ‘Evil company corrupts good habits’” (1 Corinthians 15:33).