Many textbooks and scientists teach that humans and all forms of life evolved over millions of years. They teach that this theory of evolution has been proven by scientific evidence. When we look closely at the evidence, however, we discover that evolution is not true. It is a false theory that goes against the laws of nature. Furthermore, much of the information, which supposedly supports evolution that is in textbooks and journals, is full of mistakes and untruths. Many of the “proofs” used to spread the theory of evolution have been known by evolutionists for decades to be false, and still those proofs continue to be used. Let’s take a closer look at some of this “evidence” for evolution that is not really evidence at all.

In the 1860s, there was a man named Ernst Haeckel who believed in evolution. He was a German professor at the University of Jena. During his years of teaching, he tried to convince his students that evolution was true. To “prove” this to his students and fellow teachers, he used the idea that a human baby goes through different evolutionary stages as it grows. According to Haeckel, a human embryo (a baby in its early stages) starts out in a one-celled stage, just like its ancient amoeba-like ancestor. It develops gill slits, just like its ancient fish ancestor. And it even has a tail, just as its ancient ape-like ancestor. Therefore, suggested Dr. Haeckel, if we will just watch a human embryo grow, then we will see the different stages of evolution.

In order to prove his theory, he made several drawings of the different stages. But when he published these drawings, other professors began to question Haeckel’s accuracy. Upon further investigation, it was discovered that Dr. Haeckel had not only been inaccurate, but he had even been dishonest.

Other science professors charged Haeckel with fraud. When confronted with the charge, he confessed that he faked some of his drawings. He also took the drawings from other people and changed them to “prove” his theory. And if that were not bad enough, in one case he used the same picture three different times, and labeled one a human, the second a dog, and the third a rabbit. With all this evidence against him, Haeckel was easily shown to be a fraud.

That should be the end of the story, but it is not. Even though Haeckel’s false theory and drawings were disproved over 150 years ago, they are still being used today in many science textbooks to “prove” evolution. Other books do not use Haeckel’s exact drawings, but they do suggest that humans go through different evolutionary stages as they grow from an embryo. However, today we know for certain that humans do not go through any other “animal” stages as they grow. A human embryo starts as a human, ends as a human, and is a human the entire time. Human embryos never have gill slits, as some textbooks suggest, and they do not ever go through a “rabbit-like” stage or a “lizard-like” stage. Humans are humans. Why are textbook writers still using drawings that were faked, altered, and falsified? That is the real mystery.

The next time you see these fake drawings, remember that Ernst Haeckel lied to us about evolution.

Sometimes the drawings of embryos are still used in books, but the argument has been changed. Instead of saying that humans go through different stages, it is argued that since human embryos look similar to the embryos of other creatures, the similarity proves they are related.

Think about it like this, sometimes you might see a person with an identical twin brother or sister. It is easy to tell that they are related because they look so much alike. Mothers and daughters often look alike, and so do fathers and sons (or even some cousins). Many times, even animals that look similar are often related to each other. Two black rabbits often have baby black rabbits, and two short dogs often produce puppies that are short like them.

The idea that similarity can show relationship is one of the arguments evolutionists use to “prove” evolution. As scientists have worked in various fields, they have learned that there are basic similarities between certain groups. Scientists call these similarities “homologous” structures. “Homologous” simply means similar. For instance, the wing of the bat, the forefoot of the turtle and the frog, and the arm of the man all have the same general structure. Evolutionists also note that the forefoot of the dog, the flipper of the whale, and the hand of man contain basically the same bones and muscles. Therefore, evolutionists conclude that all these animals must be related. They make arguments like this for the similarity of human and animal embryos as well.

How do creationists, who do not believe in evolution, respond to such an argument? Well, they certainly do not deny the fact that similarities exist. It is here, however, that a valuable lesson can be learned in the creation/evolution controversy: rarely are the facts in dispute. It is the interpretation placed on the facts that is in question. When the creationist looks at the similarities that exist, instead of claiming common ancestry, he or she says that the evidence points to a common Designer.

Think about it. Similarity often is evidence of common design. For instance, many GMC automobiles have the same wheels, body shapes, and brake systems. Why? Because they were designed by the same company. And they were designed to be able to drive on the same roads and freeways. When the Creator designed a lung, brain, or nervous system that worked well, wouldn’t it make sense that He would use these features in different animals that would all live in the same environment, breathe the same air, and eat the same food? Similarity does not always show common ancestry; many times it shows common design.

In fact, when you honestly look at all similarities, they obviously do not show common ancestry. For example, the octopus eye, pig heart, Pekingese dog’s face, and donkey’s milk all have similar parallel structures in the human body, but even evolutionists would deny the living animals in which they are found are closely related to each other or to humans.

Many books and scientists boldly claim that evolution is true, verified by science, and should be accepted by all people. They often point to “evidence” such as Haeckel’s embryos or similarities among living things to “prove” evolution. When we look more closely at the evidence, we realize that it does not prove evolution. Instead, we see that the amazing design and wonderful workings of nature point to an awesome and intelligent Creator. 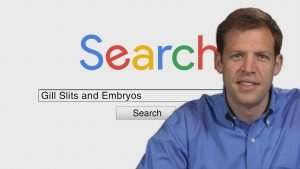 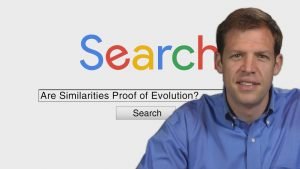 Are Similarities Proof of Evolution? | Search Creation and Evolution