Age of the Earth Creation vs. Evolution
From Issue: R&R Volume 29 #10

The sketch of a fossilized squid named Belemnotheutis antiquus is unremarkable in many ways. The “uninformed” observer would think that it is just another, everyday line drawing. What makes this sketch so noteworthy is the fact that the ink used to draw the creature was extracted from the creature’s own fossil—a fossil that, according to the evolutionary timeline, is supposed to date back 150 million years. Yes, the useable ink is supposedly 150 million years old. 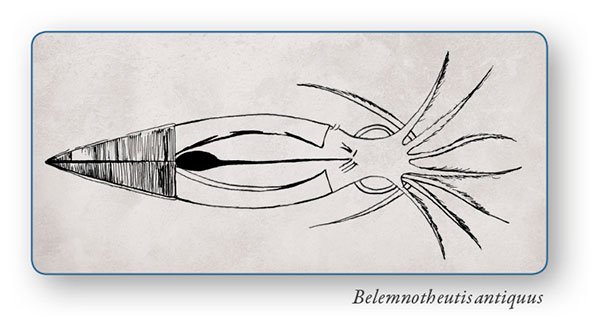 Of course, when an evolutionist discovers that a substance as prone to decay as squid ink is still usable, it calls for an explanation. Phil Wilby, the researcher who led the excavation, commented: “Normally you would find only the hard parts like the shell and bones fossilized but there are a handful of locations around the world where soft preservation of the muscle, guts and gills has taken place” (as quoted in Wardrop, 2009). Wilby noted that these soft-tissues “can be dissected as if they are living animals, you can see muscle fibres and cells.” In what sounds like an astounding understatement, he stated: “It is difficult to imagine how you can have something as soft and sloppy as an ink sac fossilized in three dimension, still black, and inside a rock that is 150 millions years old” (as quoted in Wardrop). The word “difficult” does not seem to harness the concept of the leap that Wilby is asking observers to make. Words and phrases like “miraculous,” “impossible,” “beyond comprehension,” “outside the bounds of all known scientific laws” would seem to fit better in this discussion. Supposedly, a squid’s soft ink sac has lasted for 150 million years in such a well-preserved state that you can mix the ink with a little ammonia solution and use it to draw a picture. Such a conclusion is simply not feasible, scientific, or rational.

When this discovery was made, the millions-of-years dating so often relied upon by evolutionists should have immediately been called into question. But it was not. Instead, the evolutionary community said this miraculous preservation is an example of the “Medusa Effect.” How the Medusa Effect could preserve such tissue is not explained. Nor is there any discussion of all the physical and chemical barriers that would be insurmountable in preserving useable ink or soft tissue for 150 million years. Instead, the discovery is simply presented with a wave of the evolutionary hand as if to say, “Don’t think about this too much, just trust us when we say ink could last 150 million years.”

Surely, it is high time that the thinking population of the world quits “trusting” the evolutionary scenario when such direct evidence of its inadequacy is written in “black and white.” This new discovery stretches the “soft tissue” preservation myth back even farther than many of the dinosaur fossils that contain soft tissue (see Lyons, 2007; Butt, 2009). How refreshing would it be to see the scientific community truly follow the evidence where it leads by demanding that the alleged millions of years of Earth history be re-evaluated? It is sad to realize that a general population of honest scientists following the evidence where it leads is little more than a pipe dream, mired by the reality of virtually an entire community that has been deluded by the specter of evolution. What would it take to blot out the false notion that the Earth is millions of years old? How much more ink will have to be spilled on the subject before the billions of years of evolution history are jettisoned for their lack of validity? Too much. Far too much.