The claim is often made by Muslims that the warfare, violence, and killing enjoined in the Quran are no different than the same enjoined in the Bible. Is this claim justified?

Before turning to the Old Testament, observe that in His lifetime on Earth, Jesus clearly differed with Muhammad in His promotion of religion. Muslim scholar Mohammed Pickthall’s own summary of Muhammad’s war record is an eye-opener: “The number of the campaigns which he led in person during the last ten years of his life is twenty-seven, in nine of which there was hard fighting. The number of the expeditions which he planned and sent out under other leaders is thirty-eight.”1 What a contrast with Jesus Who never once took up the sword to inflict violence on others or encouraged anyone else to do so. The one time that one of His close followers took it upon himself to do so, the disciple was soundly reprimanded and ordered to put the sword away, with the added warning: “all who take the sword will perish by the sword” (Matthew 26:52).2 Indeed, when Pilate quizzed Jesus regarding His intentions, He responded: “My kingdom is not of this world. If My kingdom were of this world, My servants would fight, so that I should not be delivered to the Jews; but now My kingdom is not from here” (John 18:36). Hence, so far as Christianity is concerned, the use of warfare and violence to advance its teaching is strictly forbidden. All those who have done so over the last 2,000 years (e.g., the Crusades) have acted in violation of New Testament teaching. And Muhammad, whose religion has been spread by such violence, is clearly acting contrary to Jesus’ teachings.

But what about the warfare and violence affirmed and approved in the Old Testament? Consider several clear distinctions:

First, the Israelite conquest of the land of Canaan was a specific, unique moment in history that was brought on by the depravity of the Palestinian peoples at the time. Deuteronomy 7 makes clear that the reason for their destruction was their idolatry and wickedness. God did not order the Israelites to kill people for failing to convert to Judaism. He ordered them to eliminate the Palestinian population due to the fact that they were extremely degraded morally and spiritually irretrievable—a final condition that only God, not mere humans, can assess. Their iniquity had become “full” (Genesis 15:16) and they needed to be destroyed—just like the pre-Flood population (Genesis 6:5). But God has never issued an ongoing, longstanding order to conquer the world and kill all sinners or all those who disagree with Bible religion. Islam, on the other hand, seeks to subjugate the entire world (Surah 2:190-193).

Second, this side of the Cross, the God of the Bible wants the entire world to have access to the Gospel without being coerced or threatened with death. Hence, the central directive and standing order of Christianity consists of “evangelizing” the whole world. The Greek word “evangelize” means to “bring or announce good news…Proclaim, preach (the gospel).”3 While Islam seeks to coerce everyone to embrace Islam, in fact, God wants the Gospel spread throughout the world until Jesus returns (Matthew 28:20). So it would be completely counter-productive for God to enjoin extermination of people for not accepting Christ during the period of time of one’s earthly sojourn. The day of reckoning will occur at the Judgment. Islam, by definition, seeks to implement Judgment Day right now—in time, in history—literally circumventing God’s own timetable. God commands the preaching of the Gospel (Mark 16:15-16) which is intended to inform and warn people about what lies ahead after death and departure from this life.

Third, God does not want human beings to be forced to obey Him. They must be allowed to exercise their own volition while in this life—it’s their choice. Islam presumes to take it upon itself to pass final judgment prematurely, rather than allowing everyone to make their own choices as long as they are alive, and then face the eternal consequences of their choices after death—not before (Hebrews 9:27). Even on the Day of Judgment, God will not force people to submit to Him. They were given that opportunity in life. At the Judgment, He will simply consign them to the location of their choice based on how they chose to live. Again, Islam interferes with God’s will. Islam is, in fact, at odds with and counterproductive to His intentions regarding the purpose of human existence on Earth. Indeed, Islam seeks to frustrate and thwart the plan of God in which life on Earth is intended to be a probationary period in which each human being is given the opportunity to exercise his free will regarding God’s will.4 What’s more, the central reason why such a mandate to subjugate the world is incorrect is because the God of the Bible would not issue such a mandate. It would conflict with His will that humans freely choose. In this regard, Islam is in direct opposition to the very nature of Deity and the image of Himself that He placed within each person (Genesis 1:27). All humans must be permitted to make that choice without coercion. The attribute of free will was created within humans by God and He wants each person to decide for himself where he will spend eternity.

Fourth, we must understand that Israel was a theocracy, i.e., civil government was combined with the direct religious rule of God. If God were so conducting Himself today, He might issue orders to a specific country regarding the elimination of various people who behave in a morally deplorable manner—but He is not so conducting Himself. This side of the Cross, He directs the Church (the only receptacle of the saved on Earth) to focus her efforts on evangelism. On the other hand, He enjoins upon civil government in all countries the responsibility to “bear the sword” (Romans 13:4)—as punishment for those who violate the civil laws of the land. Islam has confounded God’s approach by fusing religion and state. While God desires that all people on Earth permit Christian principles to permeate their lives—which would naturally and inevitably bring Christian influence to governmental institutions—nevertheless, He does not want Christianity imposed onto a government forcibly. The Founders of America well understood this principle. The majority passionately desired that the bulk of the population remain committed to the one true God (i.e., the God of the Bible) and that Christian principles permeate the Republic, but they also fiercely protected each individual’s right to choose and practice one’s own understanding of religion.

The true practice of Islam and implementation of the Quran’s directives would inevitably result in the destruction of the U.S. Constitution and the liberties that Americans have historically enjoyed. The Founding Fathers not only recognized such an outcome, they declared forthrightly the threat of non-Christian religion to the stability and perpetuation of the Republic in contrast with the inherent congruency of Christianity with the political principles they sought to establish.5 Indeed, in his “Farewell Address,” the father of our country insisted:

Of all the dispositions and habits which lead to political prosperity, religion and morality are indispensable supports. In vain would that man claim the tribute of patriotism, who should labor to subvert these great pillars of human happiness, these firmest props of the duties of men and citizens. The mere politician, equally with the pious man, ought to respect and to cherish them. A volume could not trace all their connections with private and public felicity. Let it simply be asked: Where is the security for property, for reputation, for life, if the sense of religious obligation desert the oaths which are the instruments of investigation in courts of justice? And let us with caution indulge the supposition that morality can be maintained without religion. Whatever may be conceded to the influence of refined education on minds of peculiar structure, reason and experience both forbid us to expect that national morality can prevail in exclusion of religious principle. It is substantially true that virtue or morality is a necessary spring of popular government. The rule, indeed, extends with more or less force to every species of free government. Who that is a sincere friend to it can look with indifference upon attempts to shake the foundation of the fabric?6

Finally, it is important to recognize that the evidence demonstrates that the Quran does not possess the attributes of inspiration, but rather, shows itself to be of human origin.7 Consequently, its mandate to conquer the world is of human origin. On the other hand, the Bible can be proven, by abundant evidence, to be the inspired Word of God.8 It clearly teaches that God has given no mandate this side of the Cross for His people to engage in physical force to advance Christianity.9 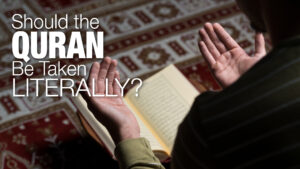 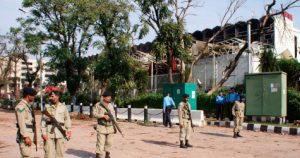 The Quran and the Muslim Bomb Blast In Pakistan