It is not uncommon to hear evolutionists claim that bacteria evolving a resistance to antibiotics are proof positive that Darwinian evolution (i.e., macroevolution) is true. Is that claim valid?

There is no question that bacteria can change or “evolve” in some sense. Fred Tenover, Director of the Office of Antimicrobial Resistance at the Centers for Disease Control and Prevention, summarized the ways in which bacteria can become resistant to antibiotics, explaining that bacteria can sometimes be intrinsically resistant to antimicrobial agents, but in other cases, there can be an acquisition of resistance.1 De novo mutation can lead to such change or resistance genes can be acquired from other organisms through conjugation (where two bacteria join, pooling or exchanging their genetic information), and rarely, DNA transposition (i.e., transformation and transduction) can lead to bacterial resistance to antibiotics, where genetic information is absorbed by or transported into bacteria from outside sources.2 The question is whether such changes imply that, (1) neo-Darwinian evolution is true (i.e., that creatures can evolve across phylogenic boundaries into a completely different kind of creature over time) or rather that (2) only microevolution or diversification of the bacteria “kind” (Genesis 1:11ff.) is true, i.e., small changes within bacteria that lead “to new varieties within a species,”3 which, based on the observed evidence, operate within strict boundaries that disallow evolution across phylogenic boundaries. More specifically, when bacteria change through mutation, does that mean that the standard, modern evolutionary model, neo-Darwinism, is true (i.e., that mutations coupled with natural selection provide the mechanism for evolution from a single-celled organism to humans)?

In response, first note that although bacteria can change through the three aforementioned mechanisms, the bacteria are still bacteria after the change. They have not changed into a different kind of creature, and therefore, such changes would fall under microevolutionary change or diversification within the bacterium “kind.” To suggest that because bacteria can change, a bacterium can, therefore, eventually change into a buffalo, is well beyond the actual evidence and requires a blind “faith” to accept.

Also keep in mind that it is misleading to claim that “bacteria evolve” anything—as though they intentionally improve themselves in response to a need. Evolutionary biologist and Distinguished Professor at Stony Brook University in New York Douglas J. Futuyma explained that “the adaptive ‘needs’ of the species do not increase the likelihood that an adaptive mutation will occur; mutations are not directed toward the adaptive needs of the moment…. Mutations have causes, but the species’ need to adapt isn’t one of them.”4 Bacteria cannot control any change that occurs in them. They cannot intentionally mutate as a response to antibiotics, and yet such intention is what evolutionists have suggested causes evolution—like the Lamarckian portrait of a horse straining to eat leaves from a tall tree and eventually evolving a long neck in order to accommodate that need. In the case of bacterial mutations, most of these mutations occur at random in a population of bacterial cells. Some mutations happen to enable bacteria to be resistant to a particular antibiotic, and others do not.

Further, consider that mutations do not add information to the genome, and the creation of information is necessary to evolve a single cell into a human.5 Repeatedly copying the old 1972 Atari video game “Pong” will not one day cause it to spontaneously “evolve” into “Madden NFL 17” for PlayStation 4 or Xbox One, regardless of the copying errors that are produced along the way. In the same way, mutations will not generate the information necessary to evolve a creature into a human.6 Information is always the product of a mind or sender.

As an example, consider bacteria in the presence of an antibiotic. If a mutation caused the export pump of a certain bacterium to be over-expressed, the change may allow that bacterium to remove the antibiotic more efficiently and, therefore, allow it to survive in the presence of the antibiotic. At the same time, neighboring bacteria may not survive the same conditions since their pumps were not over-expressed. So, bacteria without the mutation are selected against, and the mutated bacterium predominates. Notice, however, that this mutation did not require any new information, but, rather, involved changing existing information.

Finally, consider this important question: are mutated bacteria really better off, over-all? Evolution requires an over-all upward trend in an organism’s state. Creatures must progress and become more complex over time in order for evolution to be true; but mutations, overwhelmingly, show a downward trend in species.7 In those cases where mutations lead to beneficial outcomes, like those that lead to antibiotic resistance in bacteria, the change can actually tend to make those bacteria less viable over-all—e.g., outside of the environment where the antibiotic was present.8 In the example of a bacterium with an over-expressed pump, in the absence of the antibiotic, it may not be advantageous to the bacterium for its pump to be over-expressed. In humans, genetic mutations that lead to, for instance, a milk allergy, might cause those individuals with the allergy to temporarily fare better if they live in areas where there are breakouts of infectious microbes in cow’s milk. Over-all, however, the milk allergy could cause them to be deficient in calcium and potassium. Those with the sickle-cell trait—where one parent passes a mutated hemoglobin gene to a child and the other passes a normal gene9—do not die from having the trait, and they also tend to have a resistance to malaria because of it.10 Does that mean that those with the sickle-cell trait are more fit, over-all, in comparison to those without it? Have they really evolved to a higher life form by acquiring the trait? Certainly not. Those with the sickle-cell trait can have serious health problems, and their children are more likely to develop the dangerous disease sickle-cell anemia, depending on the genes passed on by the other parent.11 The negatives of the mutated hemoglobin outweigh the positives. The Second Law of Thermodynamics—the Universe is gradually deteriorating and decaying—demands that continual digression and deterioration occur in the genome, not progression toward higher beings as evolution requires. Genetic entropy is the rule.12

Bottom line: bacteria, and all living organisms, change over time, in harmony with how God created creatures in the beginning. God created distinct “kinds” of creatures during the Creation week, and representatives from many of those kinds were brought onto the Ark before the Flood. Those representatives had sufficient genetic potential to cause an immense amount of diversity to come about within those respective kinds over the centuries since the Flood.13 Though the primary mechanism for that change is still being investigated, mutations do generate a degree of change in species. Those mutations, however, according to the evidence, do not have the potential to turn bacteria into something other than bacteria. Indeed, the Earth consistently “[brings] forth the living creature according to its kind” (Genesis 1:24).14

5 Note that the second and third mechanisms listed in paragraph two involve the addition of genetic information to bacteria, but it is a pooling of already existing information, not the generation of new information. The information already had to exist.

8 Luke McNally and Sam P. Brown (2016), “Visualizing Evolution As It Happens,” Science, 353[6304]:1096-1097, September 9. The authors acknowledge that “[a] key factor slowing the spread of antibiotic resistance is the cost of resistance; resistance mutations generally reduce growth in the absence of the antibiotic” (p. 1097, emp. added).

14 Special thanks to biochemist Dr. Joe Deweese for reviewing this article and offering helpful suggestions. 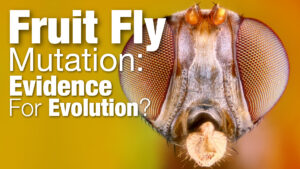