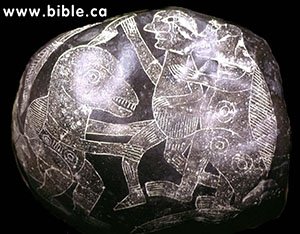 In the 1930s, a man named Dr. Javier Cabrera started collecting strange stones that an ancient Indian culture had carved. Today, there are about 11,000 of these stones. They are called Ica stones because they were found in and around the city of Ica, Peru. The stones have caused quite a stir because of the carvings on some of them. They are covered with pictures of an ancient Indian culture. Many of the carved stones show ordinary, everyday scenes. But some of the carvings portray humans in close contact with dinosaurs. There are scenes of men hunting dinosaurs, riding dinosaurs, and leading them by ropes around their necks.

These stones present a big problem for the theory of evolution. According to evolution, humans and dinosaurs were separated by millions of years. Because of the dinosaur carvings on the stones, some people say that they could not have been carved by ancient Indians. Of course, that is exactly what would be expected. If evolutionists admit that the stones are really from an ancient Indian culture, that would prove that humans and dinosaurs lived at the same time. And it would disprove a whole lot of evolutionary teaching that has been done in the name of “science.”

There are several things about the Ica stones that help prove they are real. First, the stones show scenes from an early Indian culture. There is no other culture that anyone has studied that these scenes copy. Second, many of the stones show signs of being carved long ago. They have dirt build-up on them and look like other ancient Indian artifacts. Third, just like the Julsrud collection, many of the Sauropod dinosaurs on the stones show a row of spines or spikes on their backs. Yet modern scientists did not know these dinosaurs had spikes on their backs until the year 1992.

There is a good chance that the information about the Julsrud collection and Ica stones will never get into popular textbooks. It is not because the information is wrong. It is because it goes against evolution. If we understand the Bible, and look at all the scientific and historic evidence, then carvings like those found on the Ica stones are exactly what we would expect.