Did Jude Treat Noncanonical Writings as if They Were Inspired?

There are sixty-six books commonly accepted as Scripture—the divinely inspired Word of God. Origen (c. 185-254), a prolific early Christian writer, noted a commonly accepted list of 27 New Testament books, indicating that by the second or third century, the New Testament canon was established (McGarvey, 1974, 1:66). There are many other books, beside the New Testament canon, that are considered inspired by some scholars, but not all (A.P. Staff, 2003, p. 1). The Bible is complete as it is, sufficient for the spiritual needs of Christians (2 Timothy 3:16-17; Luke 21:33; John 12:48).

Critics of the Bible would like nothing better than to show that God’s Word is a tangled web of contradictions, inconsistencies, and untruths. To that end, many critics have attempted to chip away at the credibility of Scripture by showing that it simply is impossible to determine what material is Scripture and what material is not. They have alleged that the biblical writers themselves accepted extrabiblical sources as inspired Scripture. One instance of a biblical writer allegedly treating noncanonical material as authoritative is in Jude 9. “Yet Michael the archangel, in contending with the devil, when he disputed about the body of Moses, dared not bring against him a reviling accusation, but said, ‘The Lord rebuke you!’ ”

Aside from Jude 9, there is no biblical record of any “contention” or meeting between the devil and Michael the archangel. Many scholars, based on the writings of Clement, Justin Martyr, Irenaeus, Origin, and Didymus (Guthrie, 1962, p. 918; Earle, Blaney, and Hanson, 1955, p. 411), assume that Jude 9 is a reference to an apocryphal book called The Assumption of Moses, a work that is extant only in fragmental form (in Latin and in a translation from Greek). The fragment now known as The Assumption of Moses presents the account of Moses’ appointing of Joshua as his successor, and a description of the future of Israel during the conquest of the Promised Land. According to Richard Lenksi, scholars believe that the missing portion of The Assumption included “an elaboration” of Deuteronomy 34:5, the biblical account of Moses’ death, showing how God used angels to bury Moses (1966, pp. 601-602). It is thought that The Assumption of Moses, at this point, used Zechariah 3:1-2 as its basis for the use of the phrase “The Lord rebuke you!” It has not been proven, however, that Jude intended to quote from The Assumption of Moses.

Jude is the only New Testament book that seems to include a direct citation of a Jewish apocryphal work, which is, in this case, The Book of Enoch (Guthrie, p. 917). The apparent reference to Enoch’s prophecy is in Jude 14-15. An example of the kind of criticism that comes against Jude 14-15 is that of Carroll D. Osburn, a distinguished professor of New Testament at Abilene Christian University. Dr. Osborn argued in his book Peaceable Kingdom (1993, p. 94) that Jude should not be included in the New Testament canon because, among other reasons, Jude 14-15 discusses an event that also is recorded in The Book of Enoch. Enoch’s book apparently has more than one author, but scholars differ on which author wrote which portions, and it is uncertain when each portion was written. According to Sir Frederic Kenyon, former director and principal librarian of the British Museum, The Book of Enoch is pre-Christian, and parts of it are probably pre-Maccabean (1949, p. 246). However, there is no positive proof that The Book of Enoch existed as early as the time of Jude (Barnes, 1949, p. 400), or that it can even be traced back as far as the third century (Woods, 1962, p. 399). It is thought to have been written in Palestine. David Childress gave an overview of the history of The Book of Enoch:

The apocryphal Book of Enoch the Prophet was first discovered in Abyssinia in the year 1773 by a Scottish explorer named James Bruce. Bruce, a sort of 18th Century Indiana Jones, may have seen the Ark of the Covenant at Axum (or its copy, as we surmise), and was able to obtain the ancient Coptic Christian text, approximately 2,000 years old. In 1821 The Book of Enoch was translated by Richard Laurence and published in a number of successive editions, culminating in the 1883 edition (2000, p. 328).

Now Enoch, the seventh from Adam, prophesied about these men also, saying, “Behold, the Lord comes with ten thousands of His saints, to execute judgment on all, to convict all who are ungodly among them of all their ungodly deeds which they have committed in an ungodly way, and of all the harsh things which ungodly sinners have spoken against Him.”

And behold! He cometh with ten thousands of His holy ones to execute judgment upon all, and to destroy all the ungodly: and to convict all flesh of all the works of their ungodliness which they have ungodly committed, and of all the hard things which ungodly sinners have spoken against Him.

Several points should be considered about Jude’s citation of Enoch’s prophecy. Because it is so difficult to date the origin of The Book of Enoch, and because numerous portions of the book suggest that the writer was influenced heavily by the New Testament, Guy N. Woods, commentating on Jude, wrote:

There are sharp variations between the statement allegedly cited by Jude and the actual statement as it appears in Jude. There is more reason for supposing that the book of Jude is older than this so-called “Book of Enoch” and that the author quoted from Jude rather than Jude from him! In the same fashion that Peter knew that Noah was a preacher, that Lot was vexed in Sodom, and that Paul knew the names of the Egyptian magicians; Jude learned of Enoch’s prophecy—by inspiration (1962, p. 399).

Let us assume, for the sake of our study, that The Book of Enoch existed at the time that Jude wrote, and that Jude really was referencing it. Simply because Jude knew of Enoch’s prophecy and approved it, does not necessarily imply that Jude certified the entire collection of Enoch’s writings as inspired of God. The Greek word translated “prophesied” in Jude 14 is propheteuo, a word that is used on only one occasion in the New Testament (Matthew 15:7) for a citation of an Old Testament passage (Isaiah 29). The cognate Greek noun prophetes, which relates to the verb propheteuo, was used by Paul to refer to a heathen poet (Titus 1:12). There is no evidence, then, that Jude referred to Enoch’s prophecy as an inspired work. Why, then, did Jude mention The Book of Enoch? He recognized that the prophecy of Enoch had turned out to be a true prophecy. Jude never gave indication of what he thought of the remainder of The Book of Enoch.

Many times in Scripture, inspired writers use other sources of information; sometimes these sources are inspired, and sometimes they are not. For an example, one occasion when an inspired writer used an uninspired source is in 1 Corinthians 10:4, where Paul apparently made a reference to Jewish legend to support his own inspired interpretation of Israel’s wilderness wanderings (Lenski, 1937, pp. 392-393). On other occasions (Acts 17:28; Titus 1:12-13), Paul quoted from pagan poets to support his own assertions, and even told his audiences that the specific portions of the pagan writings he referenced were accurate. Did Paul claim that these extrabiblical materials were inspired? Certainly not. Paul used supporting materials that would have been meaningful to his audiences. The noncanonical works that were cited by New Testament authors were highly respected. The fact that Paul used noncanonical sources to add an extra dimension to his message should not motivate us to regard any of Paul’s writings as inferior, or to totally disregard them. The same is true in the case of Jude’s epistle.

Further, Jude did not necessarily imply that Enoch saw into the future to predict attitudes or actions of the sinners under consideration in the epistle. All that is necessarily implied in Jude 14-15 is that Enoch’s prediction happened to be descriptive of the men about whom Jude wrote (Barnes, 1949, p. 399).

We probably will never be sure when (or if) Jude received information from earthly sources about Enoch’s writing or The Assumption of Moses. Perhaps Jude heard about it from traditional sources or from the books themselves, but this does not alter the fact that Jude was inspired of God. It is possible that the Holy Spirit, as He inspired Jude, certified that one particular portion of The Book of Enoch is correct, though not inspired. It is altogether certain, however, that despite critics’ allegations, the Bible continues to stand firm as the sole message from the Creator—always accurate and dependable.

Kenyon, Frederic (1949), The Bible and Archaeology (Britain: Harper and Brothers).

Lenski, Richard C. H. (1966), The Interpretation of I and II Peter, the Three Epistles of John, and the Epistle of Jude (Minneapolis, MN: Augsburg).

VanderKam, James C. (1984), Enoch and the Growth of an Apocalyptic Tradition (Washington, The Catholic Biblical Association of America).

The Dead Sea Scrolls and the Bible 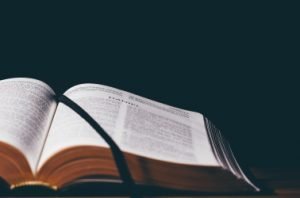 Has the Bible Been Transmitted To Us Accurately?