You might occasionally respond to the question, “Are you the strongest person in the world?” with a simple “Yes,” or a humble, “I’ll let my actions speak for themselves.” However, it would be unnecessary (and annoying) for you to walk around every day telling people, “I’m the most physically powerful person alive.” “I’m the strongest person on the planet.” “Have I mentioned that I’m really strong?”

Some people claim that Jesus was not God. Atheists claim this about Jesus because they do not believe that God even exists. (So how could Jesus be God?) Others contend that Jesus was not Deity because Jesus supposedly “never claimed to be God.” Is this statement true? Did Jesus never claim Godhood?

Similar to how the strongest person on the planet would not need to go around constantly claiming to “be the strongest,” Jesus did not make constant claims about his Divine (God) nature. He did not go up to every person He met and say, “Hello. I’m God.” “Hey there. Did you know you are talking to your Creator?” Jesus did not walk around Galilee, Samaria, and Judea like an arrogant, annoying madman constantly shouting about His Godhood. For the most part, He let His actions do the talking.

Jesus fulfilled all of the Old Testament prophecies about the coming Messiah. He worked all manner of supernatural miracles in order to provide proof of His divine message and nature. (He demonstrated His superiority over nature, diseases, demons, and even death.) He had the power personally to forgive anyone of all sins. He even accepted worship, which is reserved only for God. Indeed, regarding Jesus’ nature, for the most part He let his “actions do the talking.” However, simply because His “actions speak louder than words,” does not mean He failed to make some serious claims about His Divine nature.

So where exactly did Jesus announce His Godhood? In truth, the fact that Jesus claimed to be the promised Messiah (the Christ) should be proof enough. When the Samaritan woman at the well said to Jesus, “‘I know that Messiah is coming’ (who is called Christ). ‘When He comes, He will tell us all things.’ Jesus said to her, ‘I who speak to you am He’” (John 4:25-26). Just before Jesus’ crucifixion, when the Jewish high priest asked Him directly, “Are You the Christ, the Son of the Blessed?” Jesus said, “I am” (Mark 14:61-62).

What does claiming to be the Messiah have to do with Jesus being God? Simply that long before Jesus appeared on Earth in the form of a man in the first century, the Old Testament foretold of the Messiah’s Godhood. In approximately 700 B.C., Isaiah prophesied about many things concerning the Christ, including that “the government will be upon His shoulder. And His name will be called Wonderful, Counselor, Mighty God, Everlasting Father, Prince of Peace” Isaiah 9:6. The Messiah Isaiah wrote about would not only be the “Wonderful Counselor” and “Prince of Peace” (Ruler of a peacefully governed, eternal Kingdom), but He would also be “mighty God” and “everlasting Father” (or Father of eternity)—He is eternal, and He is “Mighty God.”

Isaiah also prophesied of the virgin birth of the Messiah, and that His name would be “Immanuel” (Isaiah 7:14), which means “God with us” (Matthew 1:23). Why would Isaiah call the Messiah “Mighty God,” “Everlasting Father,” and “Immanuel,” if He was not God?

Truly, long before the Christian age, even long before the birth of Jesus, the Old Testament provided inspired testimony of the nature of the Christ. He is Mighty God, Immanuel (“God with us”), the Eternal One, “the Alpha and the Omega, the Beginning and the End…Who is and Who was and Who is to come, the Almighty” (Revelation 1:8; cf. Isaiah 41:4; 44:6).

Jesus’ Divine Unity with the Father

While at the Feast of Dedication in Jerusalem, Jesus’ enemies surrounded Him and asked, “If you are the Christ, tell us plainly. Jesus answered them, ‘I told you, and you do not believe. The works that I do in My Father’s name, they bear witness of Me” (John 10:24-25). Indeed, (1) Jesus had already claimed to be the Divine Messiah, and (2) He worked supernatural miracles to back up those claims.

He then made another astonishing statement about Himself on this occasion. He said: “I and the Father are one” (John 10:30, NASB). “Then the Jews took up stones again to stone Him” (10:31). Why did they want to kill Him? They said to Christ: “For a good work we do not stone You, but for blasphemy, and because You, being a Man, make Yourself God” (10:33). Jesus did not back down from the claims He made, from this hostile crowd, nor from their accusations. Instead, He closed the discussion by (1) reminding them of His supernatural miracles and (2) declaring: “the Father is in Me, and I in Him” (10:38). “Therefore they sought again to seize Him, but He escaped out of their hand” (10:39). Why? Because Jesus was claiming (by word and deed) a unique, Divine unity of nature with the Father.

Neither on this occasion (in John 10) nor on any other did He back down from His claims or seek to correct the views of others who came to the conclusion that He was indeed claiming Divinity. (Recall what the apostle Thomas said to the resurrected Jesus: “My Lord and My God”—John 20:28. Jesus did not correct the apostle, but acknowledged his belief in Him. Belief in what? In Jesus being “Lord” and “God.”)

In John 5, when Jesus’ enemies came to the conclusion that Jesus was “making Himself equal with God” (5:18), Jesus did not correct them as if they had misunderstood something about His nature. In fact, He responded to them saying (what no good man or good angelic being would ever say): “all should honor the Son just as they honor the Father” (John 5:23). Only if a person understands that the Son is God just as the Father is God can that person honor the Son “just as” he honors the Father.

Admittedly, Jesus did not constantly go around telling everyone, “Hey everybody, I’m God.” As would be expected from the humble, powerful, secure-in-Himself Savior, Jesus mainly let His actions do the talking regarding His nature. Still, on several occasions, the Master Teacher made some very important claims about His unique, divine nature. 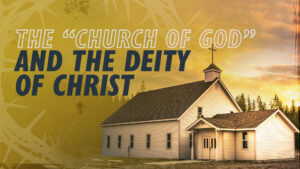 The “Church of God” and the Deity of Christ 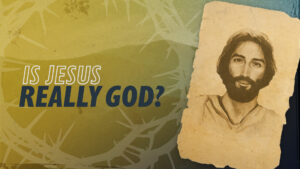