It never ceases to amaze me the lengths to which some will go to reject the rational conclusion that God created everything in six days (Genesis 1-2; Exodus 20:11). In an effort to counter various common-sense arguments that Christians present for a literal interpretation of Genesis one and a recent Creation (as opposed to a multi-billion-year, evolutionary process), evolutionists continually draw irrational conclusions. Consider two explanations by evolutionists attempting to explain away evidence creationists present for the coexistence of humans and dinosaurs in the past.

1. Whereas creationists believe that both the Bible and secular history teach that man once lived on Earth with dinosaurs (or “dragons;” see Lyons and Butt, 2008, pp. 13-45,109-134), evolutionists must somehow explain the existence of a plethora of stories of humans interacting with “dragons.” Why has humanity “since the dawn of recorded history” (“The Spread…,” 1981, 89:103) told stories of large reptilian creatures with long, serpentine necks, elongated bodies, massive tails, horned-heads, and some with membranous wings? Although evolutionist Ker Than was honest enough to admit that “[o]f all creatures that ever lived, pterosaurs probably most closely resemble the dragons of European legend” (2007), surely this couldn’t be the answer. After all, evolution says that pterosaurs and dinosaurs went extinct 60+ million years before humans allegedly evolved. What was Ker Than’s #1 explanation for the undeniable existence of antiquated “dragon legends” around the world? With all seriousness, he wrote:

To people living in ancient times, a comet streaking through the skies with an icy tail millions of miles long would have closely resembled such a creature…. If comets were the inspiration for some dragons, it could help explain why dragons are ubiquitous in the myths and legends of so many different cultures in all corners of the world (2007, emp. added).

In one of the few places I have ever seen evolutionists attempt to answer the dragon/dinosaur conundrum, a popular evolutionary writer concludes that a comet closely resembles a dragon. Absurd!

2. If, as the Bible teaches, humans once observed dinosaurs in the distant past (Genesis 1-2; Exodus 20:11; cf. Job 40:15-24; Job 41:1-34), it would seem logical that they not only would have told stories about what they saw (i.e., “dragon legends”—no doubt some were exaggerated), but occasionally they would have made some type of drawing or carving of them. In fact, this is exactly what has been found around the world: antiquated carvings and paintings of dinosaurs and dinosaur-like creatures (see Lyons and Butt, pp. 47-107). But such evidence conflicts with evolutionary theory. (If the ancients never lived with dinosaurs, and we did not learn about dinosaurs from the fossil record until modern times, our ancestors allegedly could not have illustrated dinosaurs; see Lyons, 2008.) Other explanations must be proposed; else evolution’s “factuali 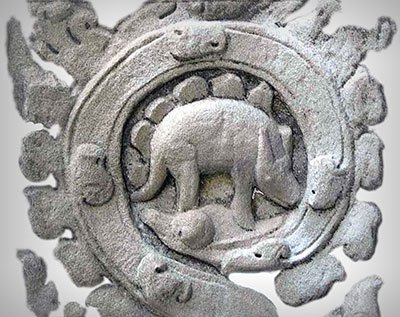 ty” would be called into question. Sadly, more often than not, evolutionists choose to “toe the party line” and come up with other explanations, regardless of their improbability.

Take, for example, the explanation one evolutionist gave of the Ta Prohm temple carving near Siem Reap, Cambodia (a carving that we have discussed at length elsewhere; see Butt and Lyons, 2008). Rather than admit what any unbiased child would call the animal (a “Stegosaurus,” or “dinosaur” at the very least), Dr. Steven Novella chose to point out what he called “creationist illogic” (2008). After showing two pictures of chameleons, he writes: “Ding, ding, ding, ding, ding! I think we have a winner. At the very least we can conclude that the temple relief looks much more like a chameleon than a stegosaurus” (emp. added). A chameleon? Really? One wonders why, when I randomly showed a class of middle school students this particular rock carving (which I had every reason to believe they had never previously seen) every student in the class identified the animal as a dinosaur, or more specifically as a Stegosaurus. [To read much more about this rock carving, as well as several others, see Lyons and Butt, 2008. NOTE: The most distinguishing part of a Stegosaurus (its plated back) is unlike any animal alive today. Though the carving may not be what a meticulous scientific illustrator would draw, one has to keep in mind that the ancients were (1) carving on rock, (2) working within the confines of a relatively small circular area, and (3) likely working from memory (either their own or from others who described the animal).]

Although Christians are continually mocked for believing that God designed all the various kinds of animal and human life on days five and six of Creation, in reality such a Creation makes perfect sense. The Bible, history, and true science are in complete agreement. It is logical to believe that “in six days the Lord made the heavens and the earth, the sea, and all that is in them” (Exodus 20:11). What we find illogical, however, is to maintain that “dragons” came from comets and that the CambodianStegosaurus carving looks like a chameleon.

Lyons, Eric (2008), “Did the Ancients Base Their Dinosaur Drawings on Fossils?” https://apologeticspress.org/APContent.aspx?category=9&article=2444&topic=59.

Than, Ker (2007), “Top 10 Beasts and Dragons: How Reality Made Myth,” LiveScience.com, http://www.livescience.com/animals/top10_dragons.html.