A notable debate on the existence of God was conducted on February 12, 2009 between popular atheist Dan Barker and A.P.’s own Kyle Butt. In addition to the capacity crowd of 500 and the thousands that watched over the Internet, the debate has been viewed by many more by means of the DVD released by Apologetics Press last year. 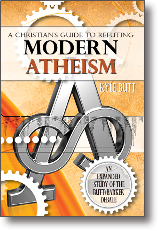 Having engaged in over 70 public debates, Dan Barker is widely considered among atheists to be well-qualified to articulate the atheist’s viewpoint.

Due to the brief nature of the debate, a total time of about two hours, several issues were broached that called for a more thorough treatment. While many of Barker’s atheistic contentions were answered in the main, we thought it would be beneficial to provide more comprehensive responses to his assertions. In that regard, we are pleased to announce the release of the book version of the debate, titled A Christian’s Guide to Refuting Modern Atheism, subtitled “An Expanded Study of the Butt/Barker Debate.”

This volume contains a complete transcript of the oral debate. However, it also contains an additional 200+ pages of detailed analysis and refutation of Barker’s atheistic allegations. Consequently, in addition to providing the reader with a response to Barker’s debate points, this outstanding book serves as a valuable guide to refute most modern atheistic attacks on the God of the Bible. Indeed, it offers a decisive defeat of atheism.

At a time when a tidal wave of skepticism, unbelief, and rejection of the Christian worldview is sweeping over the nation, this volume constitutes a welcome addition to the Christian arsenal in the never-ending war between good and evil. You will want this book in your library, and you will want to use it to bolster the Christian convictions of your children, grandchildren, and friends.