Biological Clocks: Evidence for a Clockmaker

[EDITOR’S NOTE: The following article was written by A.P. staff scientist Will Brooks, who holds a Ph.D. in Cell Biology from the University of Alabama at Birmingham.]

If one were to ask a clockmaker, “Could this device have constructed itself?” the reply would most certainly be “No.” Clocks are complex instruments designed to accurately and repeatedly keep time to the millisecond. The complexity reaches all the way down to the system of gears and shafts which drive the instrument. It would be inconceivable even to consider the idea that such an instrument would evolve naturalistically over time, eventually reaching a point when it is ready to keep accurate time without missing a single second. Yet, this is exactly what evolutionists would have us to believe regarding an even more complex instrument, the cell division cycle—our own biological clock. [NOTE: The following discussion of cell division is based on Alberts, et al., 2002.] 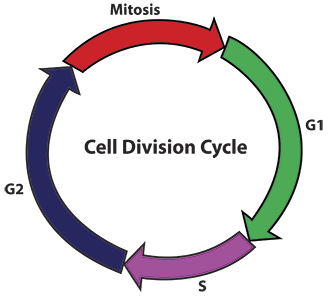 division and reproduction of all cells from the single-celled amoeba to cells in the human body. The complexity and coordination of this cycle is staggering. The cell cycle is divided into four primary phases: G1, S, G2, and M.

G1, or the Gap 1 phase, is the time in which cells carry out all of the normal processes of the cell. Some cells remain in this phase for very long periods of time. But, when appropriate stimuli are encountered by a cell, a round of cell division is triggered. This point of no return is known as the restriction point. Once a cell passes this point, it must complete the entire cell cycle and return once more to G1. After a cell reproduces, it must prepare for the next phase of the cell cycle: S-phase or DNA synthesis phase. This preparation requires activating countless genes and making many new proteins that are used only during this one phase of the cell cycle. Once every component is ready, S-phase may begin.

During the DNA synthesis phase, the cell must make an exact copy of its nuclear DNA. This duplication is important because both new cells that will result from cell division must contain equal and identical copies of the parental cell DNA. One human cell contains roughly four billion base pairs of DNA. Copying all of this DNA without error is no small task, yet the cell does so incessantly.

Following completion of DNA synthesis, the cell enters the second gap phase, G2. During this period, the cell prepares for physical division, which involves the production of a whole new set of proteins. At the same time, all those proteins used during S-phase are degraded, since they are no longer needed, and their presence would only promote more DNA synthesis. After all the proper proteins are made and degraded, the cell is ready for physical separation, which takes place during mitosis or M-phase.

Mitosis involves the separation of chromosomes, followed by the separation of the cell. Human cells have 46 pairs of chromosomes when they enter mitosis. Each pair must be separated in the appropriate way in order for each daughter cell to have two copies of the 23 human chromosomes. Once again, this is no small feat. Even one mistake leads to abnormal chromosome numbers in the daughter cells and is harmful—often lethal—to the cell. Yet, the cell achieves this separation without error over and over. At the conclusion of mitosis, two cells result, each identical to the other. Both cells are now once more in G1-phase, able to enter another round of cell division. This cycle is repeated time after time, like clockwork.

In a physical clock or watch, a system of gears and shafts are designed to keep the clock moving, keeping precise, accurate time. What are the driving forces, the gears and shafts if you will, of the cell division cycle? Our cells have their own mechanism for keeping things moving. Two families of proteins lie at the heart of cell cycle progression. They are called cyclins and cyclin-dependent kinases (Cdks). These two groups of proteins work in a cooperative manner to promote each action that takes place during the cell cycle. How they work to keep the biological clock ticking is amazing!

Cyclin-dependent kinases function as enzymes, with the ability to link a small phosphate group (-PO4-3) onto a variety of proteins. This linkage serves as an “on” switch for the targeted protein. By phosphorylating (linking a phosphate) to proteins in the cell, Cdks work to turn on and off other proteins that play roles in the cell cycle. But, Cdks themselves need an “on switch,” which comes from the cyclin proteins. Cyclins are able to bind to cyclin-dependent kinases in order to form a stable protein complex between the two. Once bound together, Cdks are free to phosphorylate their repertoire of targets to promote all the activities of the cell cycle.

It might seem, then, that all cyclins and Cdks are active all of the time and throughout the cell cycle, but they are not. This is where the clockwork activity of the cell is truly seen. During each phase of the cell cycle (G1, S, G2, and M), a different set of cyclin and Cdk proteins are active. Therefore, each pair of proteins is able to promote only those activities which should occur during a phase. For example, during the DNA synthesis phase (S-phase), only those proteins that play a role in making new DNA are activated. This action prevents the phases from occurring out of order or at the wrong time. But, how is only one pair of cyclin-Cdk proteins active at a time? The answer comes in the form of another cyclical event.

Unlike the Cdk proteins, which are always present in the cell, cyclin proteins come and go in a cyclical manner—which accounts for the name cyclin. Production of these proteins is coordinated with the cell cycle phases. When a cell receives signals to undergo division, the G1-cyclins are expressed by the cell. They then partner with G1-Cdks, which already are present to promote those G1 activities of the cell. Additionally, G1 cyclin-Cdks initiate expression of the next group of cyclins—the S-phase cyclins. Once expressed, S-phase cyclin-Cdk partners promote activities of S-phase and turn on the G2-cyclins. This cycle continues for each phase of the cell cycle. Figure 2 illustrates this feature by showing the levels of S-phase cyclin throughout the cell cycle. 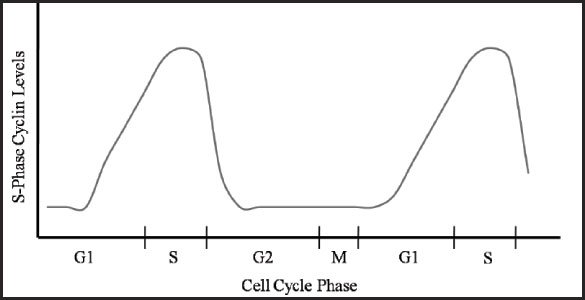 This amazing process of cyclin expression is also coupled with cyclin destruction. Once a new cyclin is present in the cell, the previous cyclin is destroyed, which effectively ends the previous cell cycle phase. This constant repetition of cyclin protein production and destruction is the driving force behind every event in the cell division cycle.

Together, the cell cycle and the cycle of cyclin protein production/destruction are an amazingly designed system of events. Such complexity is inexplicable on the basis of naturalism. In this case, the clockmaker is the intelligent Designer, God. It would be impossible for a six-foot-tall grandfather clock or even a small watch to construct itself gradually and start ticking. Equally impossible, the cell could never appear, ready to “tick” through the highly coordinated process of cell division. Just as clocks are constructed by an intelligent designer, the cell cycle is clear evidence for intelligent design in the Universe.