Beetles that Brighten the Night

There are more species of beetles in the world than any other kind of insect. (More than 350,000 different species are estimated, with more being discovered every year.) Beetles vary in size and shape. Some are long and narrow, like the giraffe weevil, while others, such as the ladybug, are short and round.

Certain click beetles commonly known as Headlight Elaters are amazing insects that can light up. Near the back corners of the second main section of the beetle (known as the thorax) are two round lights. These lights do not flash on and off, but produce a constant glow, and look similar to the headlights of a car. When they want to, these click beetles can dim or brighten their “headlights” as they see a need. For example, if they sense a potential predator, they may intensify their brightness in order to scare the possible attacker away.

No doubt, the most well known bioluminescent beetle is the firefly. Interestingly, fireflies are not flies, nor do they produce any kind of burning “fire.” In fact, one of the most impressive things about these nocturnal, bioluminescent creatures is that they can produce light without producing the heat (and great amounts of energy) that so often goes together with light.

Fireflies (also known as lightning bugs) have special chemicals in their abdomens called luciferin (lew-SI-fer-in) and luciferase (lew-SI-fer-ace), which they combine with oxygen to form a bright, heatless light. It appears that fireflies activate these chemicals for at least two reasons: (1) because they sense that they are in danger and want to warn a possible predator, or (2) because they want to attract a mate in order to reproduce. 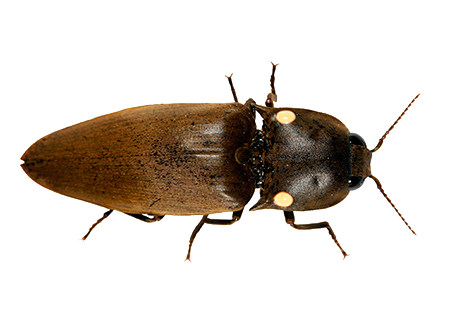 The more scientists learn about fireflies, Headlight Elaters, and other bioluminescent creatures, the more amazed they are at their complexity. Scientists have been somewhat successful at producing certain kinds of chemical light that mimic the more efficient, heatless light produced by bioluminescent creatures. However, scientists confess that light from fireflies and other creatures is still more efficient than what they have produced in laboratories. The fact is, bioluminescent bugs testify loudly to a Creator—the first Chemical Engineer.