Authority Authority Christian Living The Church
From Issue: Discovery – May 2020

Who has the authority to tell anyone what “to do” or what “not to do”? Who has the right to tell you, “You can,” or “You can’t”? Have you ever thought about the fact that real authority only exists if God exists? Why must a 17-year-old, who might be bigger, stronger, faster, and perhaps even smarter than his parents, obey his parents? Why must a 90-year-old U.S citizen pay taxes and obey the President (who might only be 45)? The answer to these and any number of other questions about real authority and power is found in God. If God doesn’t exist, then logically, you can do whatever is right in your own eyes (Judges 21:25). You might do what someone else says because it is to your advantage in a given situation, but it would not be the result of anyone actually having real authority over you—again, if God does not exist. On the other hand, if God does exist, then absolute authority exists. The logical reason for truly obeying someone is rooted and grounded in God and His Word. If God has instructed man regarding “who is to obey whom,” then such rule of law must be followed.

As man’s Creator, Provider, Savior, and Judge, God has all power and every right to tell us what to do and what not to do. By His supreme, divine nature, He has rule over us. Perhaps this comparison will help you understand God’s authority over humanity: You (as a human being) have some natural authority at your house over your dog, cat, hamster, or other animal. [But please don’t let your authority “go to your head” and abuse your “power” by being mean to your pets.] Since God made humans with a different (and much higher) kind of nature than animals (as well as plants), human beings have authority over them—authority given by God (read Genesis 1:26-28). In a similar way, God (as being the uncreated, divine One, and not human), has “natural” authority over human beings. God is “the King of kings and Lord of lords”
(1 Timothy 6:15). God has “all authority…in heaven and on earth”
(Matthew 28:18). Anyone and everyone (whether king, chief, governor, or president) is to submit to God and His supremely authoritative will.

The apostle Paul, in writing his letter to the church at Colosse, said: “Children, obey your parents in all things, for this is well pleasing to the Lord” (Colossians 3:20). God believed that this message was so important that the apostle Paul also declared it when writing to the church at Ephesus. He instructed young people, saying: Children, obey your parents in the Lord, for this is right. “Honor your father and mother,” which is the first commandment with promise: “that it may be well with you and you may live long on the earth” (Ephesians 6:1-3). Notice that this passage is a quotation from the fifth law in the Ten Commandments that God gave Moses on Mount Sinai (“Honor your father and your mother, that your days may be long upon the land which the Lord your God is giving you”—Exodus 20:12). The reason that Paul said this is “the first commandment with promise” is because this commandment was the first one with a special promise attached to it.

Generally speaking, a person who obeys and honors his or her parents will have a longer, happier, and more useful life on this Earth than those who do not. Granted, an obedient child may die in a tragic accident from time to time, but he will not die for many of the reasons that disobedient young people die. Since respectful children do not consume illegal drugs, steal from individuals or businesses, or hang out with people who are involved in such sins, they obviously will not be harmed like many disobedient children. Young people who obey their parents will form good habits (like working hard and studying the Bible), which contribute to a happy, healthy life. The simple truth is, if you want to be happy, both in this life and in the next one, then you need to be like Jesus, Who was “subject” (or “obedient”) to His parents (Luke 2:51).

Jesus desires for everyone (especially Christians) to be model citizens. He wants us to obey the laws of the government “for the Lord’s sake” (1 Peter 2:13)—because it is His Will, and it is to His glory. On one occasion, some ungodly men who disliked Jesus tried to trick Him by asking Him whether it was lawful to pay taxes to the king of Rome. Jesus asked someone to give Him a coin. He then asked them whose image was on the coin. They said it was Caesar’s. Jesus then stated: “Render therefore to Caesar the things that are Caesar’s and to God the things that are God’s” (Matthew 22:21). Paul put it this way: “Let every soul be subject to the governing authorities” (Romans 13:1). That means everyone is supposed to obey the laws that have been made by the government. Most of the laws of the land are meant to help people get along with each other, be safe, and to keep order and peace.
Think what would happen if a person did not drive on the correct side of the road. He would cause an accident and hurt himself and others. Laws are not usually meant to be bad, mean, or unfair. There is an exception to the principle of obeying the laws of the land—an exception that was given by the apostles when certain authorities told them to stop teaching people about Jesus. They said: “We ought to obey God rather than men” (Acts 5:29).

Although our sinful pride sometimes makes obedience difficult, God wants us to “be submissive to one another, and be clothed with humility, for God resists the proud, but gives grace to the humble” (1 Peter 5:5). Even Jesus, when He came to Earth to save mankind, willingly “humbled Himself and became obedient to the point of death” (Philippians 2:8). 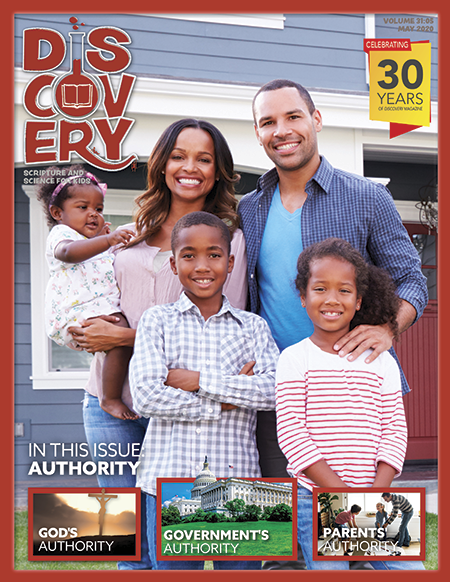 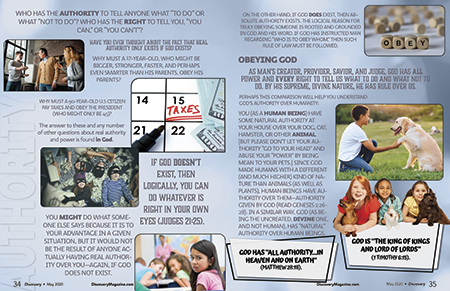 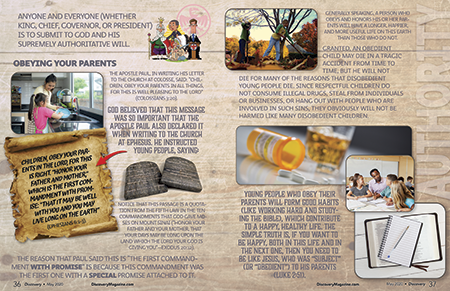 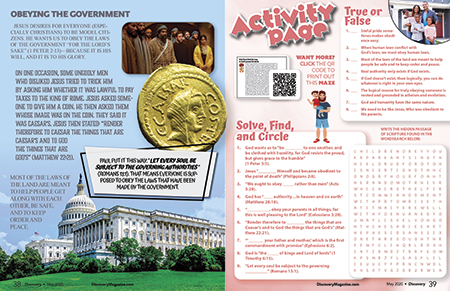 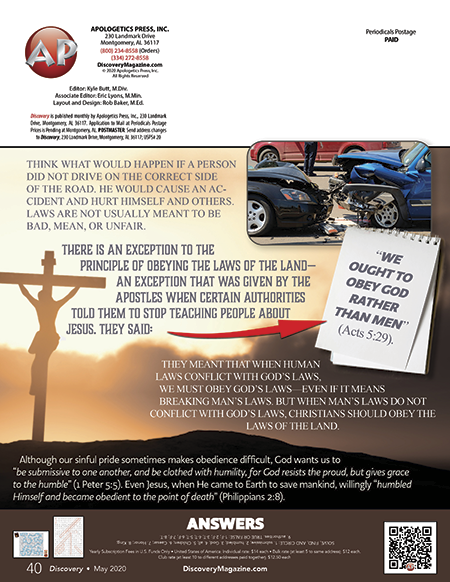