It was a normal, everyday kind of play…but a play I’ll never forget. A base runner on the opposing team was attempting to steal second base. Our catcher quickly threw the ball to second in hopes that our shortstop would catch it and apply the tag before the runner reached the base. What happened? Actually, I don’t remember if the runner was safe or not, but I do remember what I saw in the newspaper the next morning.

There it was—a picture of the play at second on the front cover of the sports section. What immediately caught my eye, however, was what I saw in the background. It was a slightly blurring picture of me in the outfield. But I wasn’t just in the outfield; I was standing in the outfield with my glove down by my side. I wasn’t running. I wasn’t walking. I wasn’t even in an athletic position ready to play. Rather than running toward second base to back up the play like I had been taught for years (in case of a bad throw), I was lazily standing and watching everything take place. 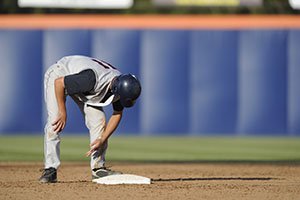 Much more important, what about your effort in the “game” of Christianity, sometimes called the Christian race, in which there is an “imperishable crown” at stake? Are you giving it your all? Are your head and heart in the game? Or, are you just standing on the sidelines (or in the outfield) hoping no one notices your lack of effort? When the apostle Paul spoke of competing in this “Christian competition,” he said to “run in such a way that you may obtain…the prize” (1 Corinthians 9:24). Paul described his own effort in the Christian’s spiritual race with expressions such as, “I discipline my body,” “I run,” “I fight,” “I press on,” and “reach forward” (1 Corinthians 9:26-27; Philippians 3:12-14). Let me ask you: Can you truthfully use these same phrases to describe your efforts in the Christian race? If not, make a change today! Don’t get caught idly standing by. Give it all you’ve got all the time (Ecclesiastes 9:10; Colossians 3:23).