The world that God created is absolutely amazing. The creatures He made to inhabit the planet are almost limitless—with so many yet to be discovered. While you and I go about our lives every day, billions of creatures are living on land and in the sea and going about their activities as God designed them to do.

Even in an unlikely place like the cold, barren, icy Antarctic, many amazing animals live and thrive. In fact, five species of krill live in the Antarctic (of the 85 known krill species worldwide). One of those five little creatures, the Antarctic krill (Euphausia superba), is one of the most abundant animal species on Earth. Each one is about two and a half inches long and feeds on plankton at night. Since krill are mostly transparent, you can see their digestive system digesting the vivid green from the pigment of the phytoplankton they have eaten. 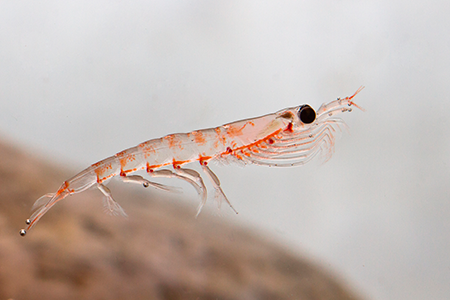 Scientists estimate there are about 500 million metric tons of Antarctic krill in the Southern Ocean—greater than the weight of all humans on Earth.They gather in such dense numbers that their swarms can stretch for miles, literally turn the water orange, and be seen from space. Since many larger animals depend on krill for their own survival, including whales, penguins, and seals, it’s as if God created krill for the primary purpose of providing an abundant food source for many larger sea creatures. After all, no “krill convention” was convened for the krill to decide to have such large numbers so they could be food for other creatures!

God designed krill with an amazing ability that some scientists call “magical.” During the winter when food is scarce, adult krill can survive more than six months of starvation. They do so by shrinking—through molting—back to their two-year-old childhood stage. This ability to “downsize” allows them to use their own body proteins as a source of fuel. Such an amazing process could not have evolved over millions of years. This ability was obviously designed by a higher intelligence—the God Who created them!