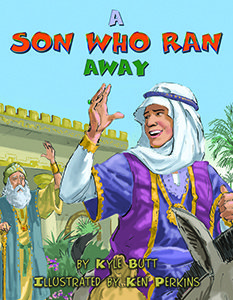 Apologetics Press has shown itself to be versatile and diversified. While focusing primarily on defending the Christian faith against atheism and evolution, our team of talented workers is also equipped to produce a variety of additional materials—all intended to prepare souls for eternity. We especially desire to assist parents and grandparents with the training of their children and grandchildren.

In that spirit, A.P. is developing a series of books based on central characters of the Bible. Take, for instance, the story of the prodigal son—one of the most insightful, memorable parables that Jesus told while He was on Earth. Through it, Christ brought to light the ravages of sin, the value of true repentance, the love of the heavenly Father, and the need to possess a compassionate attitude toward those who need God. But how can this beautiful narrative be conveyed to small children ages 2-5?

Using a masterful blend of rhyming verse expressed on a child’s level, Kyle Butt has captured the meaning and importance of the parable of the prodigal son in a fascinating, easy-to-read book for kids: A Son Who Ran Away. A beautifully bound hardback book of 24 pages, this volume joins the previously released companion book A Patient Man From Uz. In the not-too-distant future, we hope to release the third in the series, A Man Who Loved Money, and soon after that, A Faithful Man from Ur.These volumes are a must for parents and grandparents who desire to introduce their children to important Bible characters whom God chose to preserve on the pages of holy writ for all time. Add them to your child’s library today!