Announcing a New Book for Young People: A Matter Of…Fact

Just a little over a year ago—in the May 2001 issue of Reason & Revelation, I announced in my “Note from the Editor” a new book, Out With Doubt, authored by Kyle Butt, our Director of Biblical Research. This 150-page volume for teenagers was Kyle’s first attempt at such an in-depth project. And what an amazing success story his effort has become! There is an old adage that “nature abhors a vacuum.” And there can be no doubt that there was a vacuum when it came to books for teenagers on Christian evidences. Out With Doubt admirably filled the void, and quickly became one of our best-selling books. Thousands of young people have studied, and benefited from, Kyle’s first book. And that’s good news. 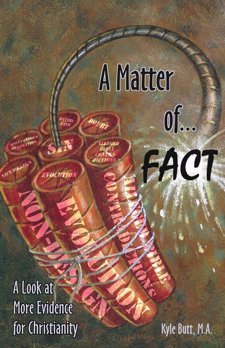 But the good news doesn’t stop with Out With Doubt, because as soon as Kyle completed that volume, he immediately set himself to the task of preparing a sequel. I am happy to announce in this month’s “Note from the Editor” that his second book, A Matter of…Fact, is now ready for distribution. And I have absolutely no doubt that it, too, is destined to become a best seller. [I admit that I am somewhat biased, but Kyle, at only 25 years old, is one of the best young writers I’ve ever seen. He has a special knack for knowing just what to say, and just how to say it, to reach teenagers with the evidence that Christian apologetics can provide to build and strengthen their faith.]

In the fourth chapter of the New Testament book of John, the story is recorded of the Lord’s conversation with a Samaritan woman. That woman admitted during the initial part of the discussion: “I know that the Messiah cometh (he that is called Christ); when he is come, he will declare unto us all things” (v. 25). Jesus not only said to her, “I that speak unto thee am he,” but gave her the evidence upon which to build a rational faith in Him as Lord. She admitted to her Samaritan friends, “He told me all things that I ever did” (v. 39). After hearing Him speak and realizing Who He was, she wanted them, too, to know! As a result of what they saw and heard, they “believed because of his word” (v. 41). Afterwards, they commented:“Now we believe, not because of thy speaking: for we have heard for ourselves, and know that this is indeed the Savior of the world” (John 4:42, emp. added).

As a result of the evidence presented to them (credible testimony from the Samaritan woman, along with firsthand evidence provided by the Lord Himself), these fortunate Samaritans could affirm confidently that they knew—as a matter of fact!—that Christ was indeed Lord. That is the purpose of Kyle’s new book—to help young people to know—as a matter of fact—that Jesus is the Son of God, that the Bible is God’s inspired Word, and that they are specially created “in His image.” The end result will be a rock-solid faith that can serve them well throughout their lives.

In its 13 chapters, the first volume, Out With Doubt, dealt with such things as: God’s existence; evil, pain, and suffering; alleged biblical discrepancies; creation and evolution; dinosaurs; miracles; the Resurrection; and Christ’s deity. The second book, A Matter of…Fact, picks up where Out With Doubt left off. In its 13 chapters, it examines such important topics as: how to build a faith founded on fact; additional evidence for the existence of God; why the Bible always remains “number one”; “buried treasure” from the field of archaeology that supports the historicity and accuracy of the Bible; the flaws of evolutionary theory; the age of the Earth; the human fossil record; Jesus as Lord; how a good God can send people to hell; and the consequences of holding to, and advocating, certain belief systems.

A Matter of…Fact is perfect for use in quarterly Bible class situations (for which it was designed). It also would work well in a summer camp or home school setting. Each lesson contains discussion questions that teachers can use to help students grasp the concepts being presented. The cost is only $7.95. Why not order a copy today for the teenager in your life? They will thank you, as a matter of fact.