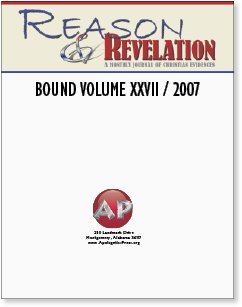 The 2007 bound volumes of our two monthly magazines are now complete and ready for shipment from our offices. These bound volumes enable the articles contained therein to remain relevant far beyond the time period during which they were authored. The 2007 bound volume of Reason & Revelation contains timely articles on such topics as: Militant Atheism; America and Atheistic Evolutionists; The Intricate & Masterful Design of the Human Ear; Comical Contentions on the Ear by Evolutionists; Indirect Observation; Inspired Writers and Competent Copyists; God and the Laws of Thermodynamics: A Mechanical Engineer’s Perspective; Discovering the Truth About the Lost Tomb of Jesus; Unity of the Bible; Design Rules; Exciting Stem-Cell News; The Purpose of Education; Our Republic Depends on Christianity?; Hindu Prayer in Congress; Historical Support for the Coexistence of Dinosaurs and Humans; and Evolution is Religion—Not Science.

As always, this beautifully bound, annual collation contains all 12 issues for the year, as well as an author/title index and attractive cover. Previous volumes from 1995-2006 are still available. See the center spread for pricing. 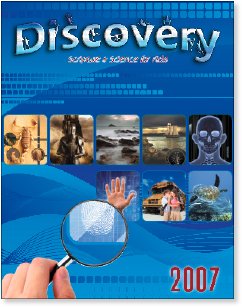 Additionally, the 2007 bound volume of Discovery, our monthly magazine on Scripture and science for children, now is available. During 2007, Discovery contained articles on such relevant topics as: Animal Tails; Food; Bones; Biomimicry (The Termite Mound, RoboLobster, BatCane, Southeast Asian Beetle, Miniature robot in the human body); The Apostle Paul; Animals that Migrate (Arctic Tern, Whales, Sea Turtles, Penguins, Monarch Butterfly); Dinosaurs (Stegosaur Carving, T-Rex Soft Tissue, Dragon Myths?, Dinosaurs Taking Flight); Metamorphosis; Pictures of the Church (Body, Bride, Kingdom, Temple, Army); The Flood (Scientific Proof, Flood Legends, Where Did All of the Water Go?, Were there flying reptiles on the ark?); and many others. Kyle Butt and Eric Lyons serve as editor and associate editor of Discovery, respectively, and do a marvelous job in presenting themes and topics that build the faith of children and insulate them against unbelief. We also have in stock bound volumes for 1998-2006.

Please be reminded that for both Discovery and Reason & Revelation, whenever the bound volumes go out of print, they are gone forever; we do not reprint them. So be sure to order your copies soon.

Bound volumes of Reason & Revelation and Discovery make extremely useful additions to personal, church, or school libraries. They also make valuable gifts for youngsters, men who are attending a preacher-training school, or students in college (especially those majoring in either Bible- or science-related fields). Why not consider giving a single volume (or, better yet, an entire set) to someone for his study and edification?