Have you ever gone camping? Maybe you are one of those people who love to “rough it” out in the “wild” with just a tent and a few supplies. Some people, however, don’t really enjoy camping. The main reason is that there are so many luxuries that you don’t normally have at a campsite. A camping tent is a decent shelter, but when it rains it is difficult to stay dry. Furthermore, campsites rarely have electricity, bathrooms, showers, or refrigerators. Camping can be fun, but most people only want to do it for a brief time and then return to their nice, warm, dry, cozy homes.

What does all this about camping have to do with Abraham? When we first read about Abraham, he and his family are living in Ur of the Chaldeans (Genesis 11:27-31). Have you ever thought about what the city of Ur might have been like? Most of the time, when we think about people living long ago, we may think of them living in small huts or houses in little villages. That is not what archaeology tells us Ur was like. 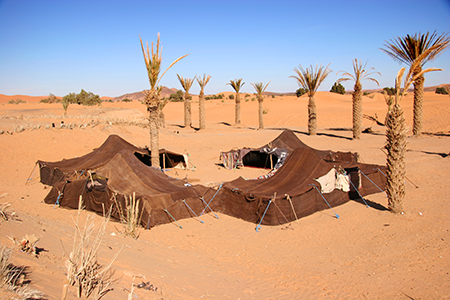 From what we can tell, Ur was one of the largest cities in the world during the time of Abraham. It most likely had tens of thousands of people. Houses have been uncovered that were two-story homes with 10 or more rooms. In one section of Ur, tombs have been discovered that contain huge amounts of gold, silver, statues, jewelry, and pottery. Also, there is a huge building called a Ziggurat that was most likely used as a temple to worship the false moon god named Nanna. In our way of thinking, Ur was like the New York City of the ancient world.

God called Abraham to leave his home and wander through the land of Canaan. Abraham and his family would be leaving the luxuries of the city and dwelling in tents. They would not have a nice, two-story home in Canaan. Instead, Abraham and Sarah would be constantly on the move.

The Bible tells us why Abraham was willing to do this. You see, he did not consider Ur or Haran or any other place on Earth to be his home. The book of Hebrews explains that Abraham sought a heavenly “homeland” and considered himself a pilgrim (or wanderer) on Earth (Hebrews 11:13-16). Like Abraham, we should all remember that this world is not our final home, but we are looking forward to heaven.