Most wasps and hornets rest during the hottest parts of the day. But not the oriental hornet. In fact, oriental hornets seem to do their most productive work in the middle of the day when the Sun is at its hottest. For a long time, scientists and others wondered why the oriental hornet can work and fly in the heat, but other hornets and wasps cannot.

To answer the question, a research team led by Marian Plotkin began an intense study of the oriental hornet. What they found was amazing. The hornet actually uses the Sun to make electricity, similar to the solar panels that humans have designed. The hornet has two special pigments (body colors) that make its exoskeleton (hard outside shell) brown and yellow. The special pigments trap 99% of all the light that hits them. Also, there are layers, tiny holes, and grooves in the exoskeleton that separate the light and make it easier to trap. 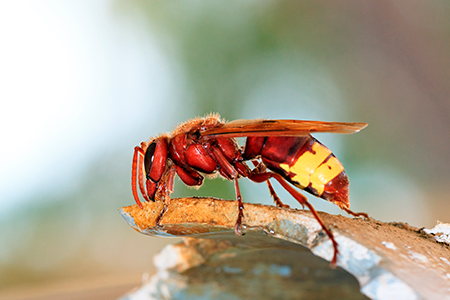 The researchers are not sure what the hornets do with the electricity. They think that they use it to stay cool when it is hot, and then turn it back into heat when temperatures get cooler. Isn’t it amazing that oriental hornets are “solar-powered”? The scientists involved in the study are looking for ways to copy the hornet’s ability so that humans can use the hornet technology to make energy. As we have learned in other issues of Discovery, when humans copy nature it is called biomimicry. The wonderful solar ability of the hornet could not have come about by accident or through random processes. Only an intelligent Creator could design such a remarkable creature.