A Shocking Gift from God

Though some disagreed with him, Benjamin believed that lightning was a form of electricity. But how would he get close enough to the storm clouds to prove it? There were not any skyscrapers in Philadelphia in 1752! So he decided to fly a silk kite into the storm, with a wire attached to the top of the kite to attract electricity and an iron key attached to the kite’s partially wet string closer to him on the ground (the string was dry near his hands). When he moved his hand towards the key (and received a shock), he thereby proved that a storm cloud contains electricity, and lightening is its discharge. [WARNING: Do not try that experiment at home!] You may have heard about Benjamin Franklin’s experiment, but he was not the first to work with electricity. In fact, Thales of Miletus, a Greek philosopher from about 600 B.C., did experiments with electricity. In 1831, Michael Faraday and Joseph Henry discovered how to generate electricity, and there began the world of electric technology we enjoy today.

As with everything else God made, we know that electricity has important purposes for the Creation. Lightning, for example, helps to purify the air of dust and pollution, as well as turning certain gases in the air into other useful products that fertilize the Earth to help plants grow. We also know that humans—our nervous systems—have electricity running through them. Without electricity, we wouldn’t work right! Did you know that our brains use the same power as a 10-Watt light bulb?

Electricity is important for keeping us alive on Earth, but we also know that God created electricity to be a powerful tool for mankind. God has always been interested in humanity studying His Creation, in order to be able to “subdue it” and “have dominion” over it (Genesis 1:28), as well as to be able to come to know Him through it (Romans 1:20). “The works of the Lord are great, studied by all who have pleasure in them” (Psalm 111:2). The more we study electricity, the more we realize what an amazing and important gift from God it is.

Truly, we live better than the kings of old, because we have harnessed the power of electricity. Imagine what King Solomon might have given to be able to flip the light switch when it got dark, watch TV when he wanted to relax, turn on the air conditioner when he got hot, play a video game while riding across the country in his chariot, look at a picture of the inside of his body to find out why he wasn’t feeling well, record a battle with a camcorder or take a picture of the beautifully constructed Temple of God, surf the Internet to find the recipe for a good pizza, or hop into a car to stroll down to the nearest amusement park—all electrically powered activities. Can you imagine what life would be like today without electricity? [As an exercise, try making a list of the things you do every day that use electricity.] If you can imagine that, you will understand what life was like for people throughout thousands of years of history, up to only the last century. 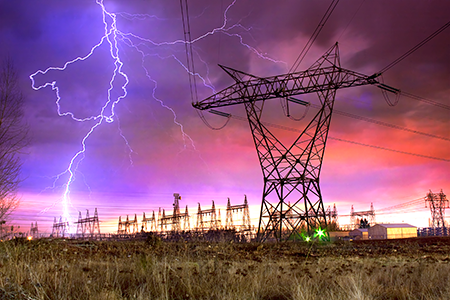 How do we generate electricity? Things are made of atoms. Have you ever seen a picture or a diagram of an atom—with the nucleus in the center (kind of like the Sun), and electrons orbiting it (kind of like planets)? The electrons on some atoms are able to break free and move to other atoms easier than can electrons of other types of atoms. Materials made of atoms whose electrons can move to other atoms easily are good conductors of electricity. In other words, electricity can “pass through” them easier (metals, for example). Electricity is the flow of those electrons (called free electrons) from atom to atom. Magnets can be used to cause that flow, since magnets “push” electrons away from themselves. Have you ever used a plunger in a toilet, pushing water into the hole at the bottom, or blown through a straw, pushing air into your drink? The force you are using to push the water or the air is kind of like what a magnet does to electrons. When a magnet is moved across a coil of metal wire, it pushes the electrons in one direction, causing a flow of electricity.

Isn’t it amazing that such a simple action can give us such amazing technologies today? Aren’t you thankful that God made electricity? Without it, you probably wouldn’t be reading this right now! “He makes lightning for the rain” (Psalm 135:7). “Marvelous are [His] works, and that my soul knows very well” (Psalm 139:14).